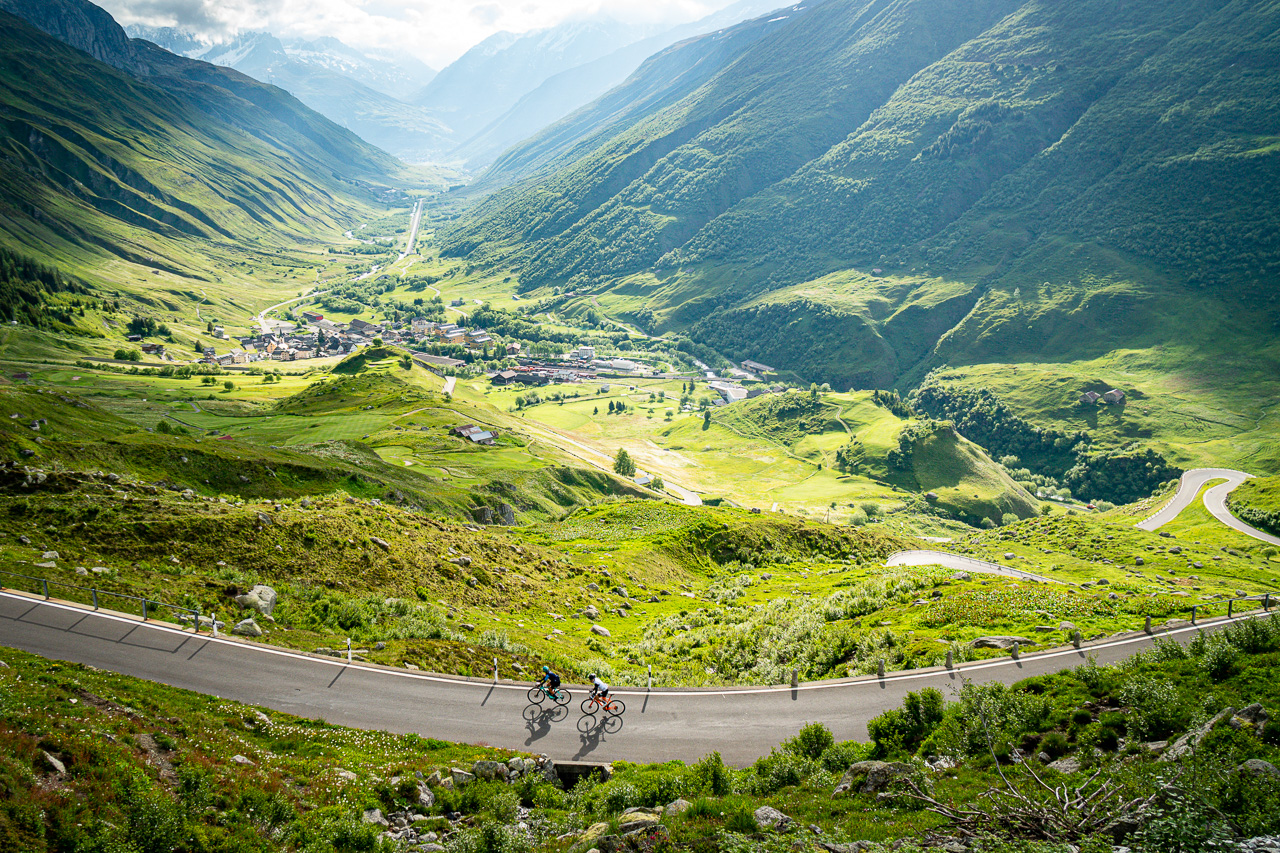 An unforgettable loop filled with switchbacks, glacier views and a cobbled pass between the Italian and German speaking parts of Switzerland

With three legendary passes that regularly feature on the Tour de Suisse programme, the Furka-Nufenen-Gotthard loop is an Alpine classic for cycling enthusiasts. It is only 106 kilometres long, but it should not be underestimated: with almost 40 kilometres of ascent, climbing is a big chunk of the ride.

From Andermatt in Canton Uri, you pass through Zumdorf, Switzerland's smallest village, before tackling the Furka Pass: a 13-kilometre ascent to the summit at 2,429 metres. Along the way, you will stop at the famous "James Bond Street" sign, which reminds you that Agent 007 carried out one of his famous car chases in Goldfinger here. You then enter the canton of Valais and a glance to the left reveals one of the most beautiful views for passionate cyclists. First you see the many twists and turns awaiting you on the Furka downhill; in the distance, the perfect switchbacks toward the Grimsel Pass. This shot is more than enough to boost your Instagram account! Shortly afterwards you pass the famous Hotel Belvedere, not far from the Rhone Glacier and the source of the river of the same name.

After the long descent through Gletsch to Ulrichen in the Goms valley, don't forget to stock up on supplies. You then head for the Nufenen Pass, 2,478 m of ascent over 13 kilometres. The pass consists of several long straight lines at the start followed by beautiful switchbacks to the top. As Switzerland's second highest paved pass after the Umbrail, and with many sections above 10%, the Nufenen is a challenge in itself.

The summit marks the entrance to a new canton: Ticino. You are welcomed into the Italian-speaking region of Switzerland with a long and magnificent descent to Airolo, where you begin the third and last ascent of the day to the Gotthard Pass (2,106 m). The fourth longest tunnel in the world swallows up most of the traffic, and what's left of it takes the main road over the pass. Cyclists, on the other hand, climb the old road, called the Tremola. This road is unique in the Alps: it is cobbled on all 24 bends of its upper section. It's enough to make you forget that you'll soon have more than 3,000 metres of difference in altitude in your legs! More information about the Tremola climb can be found here.

Once you've reached the summit, Andermatt is only a few kilometres downhill. You can enjoy a well-deserved rest in this typical village in the heart of the Swiss Alps. 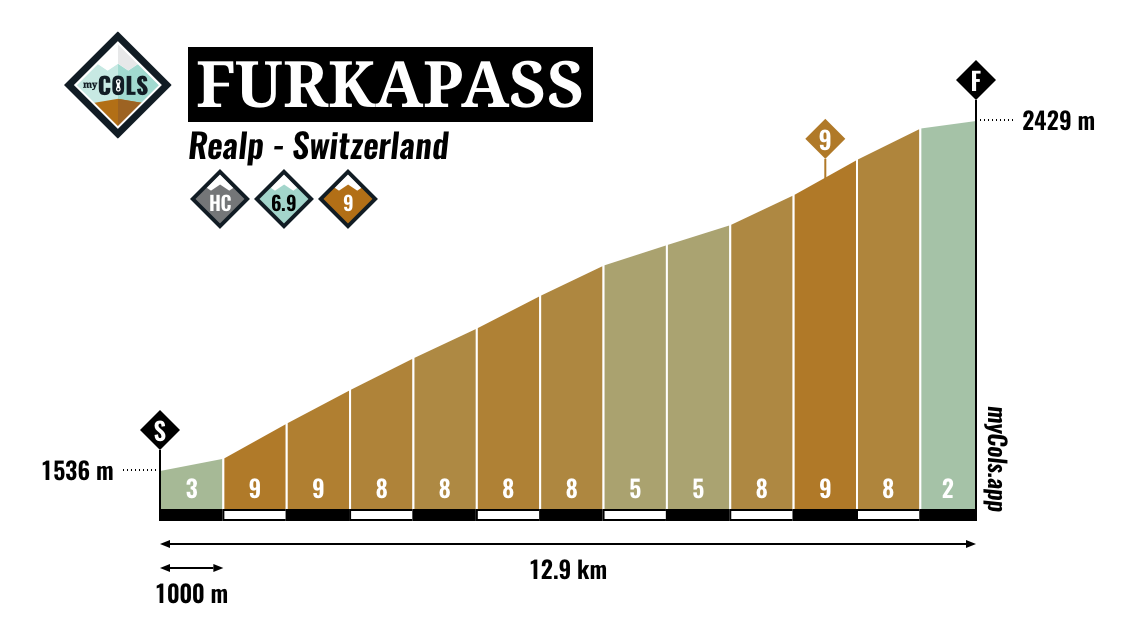 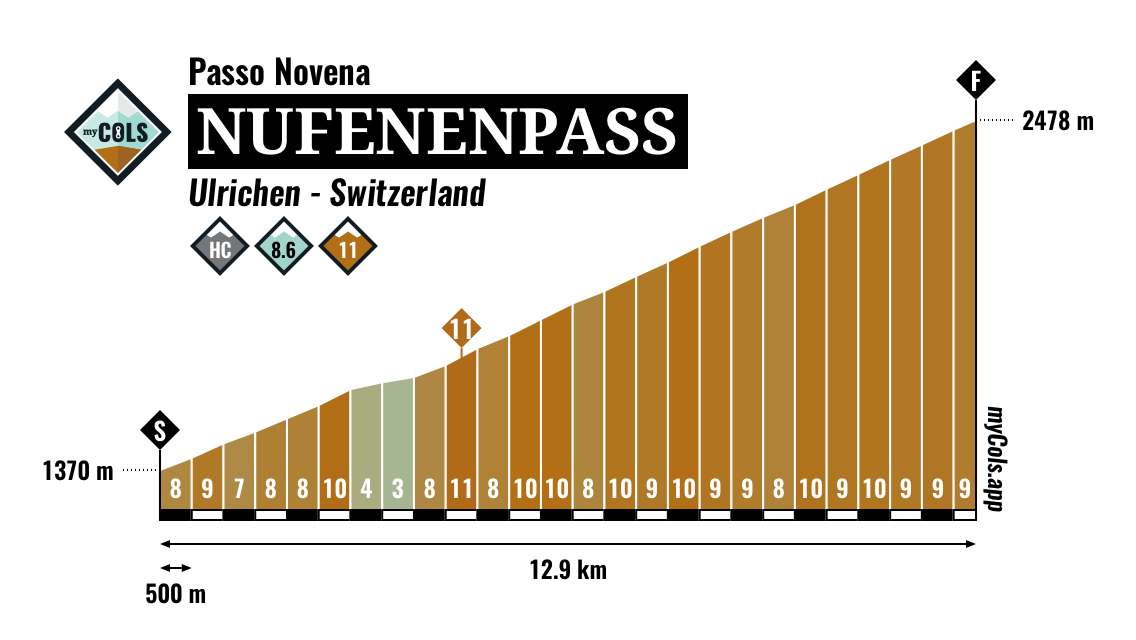 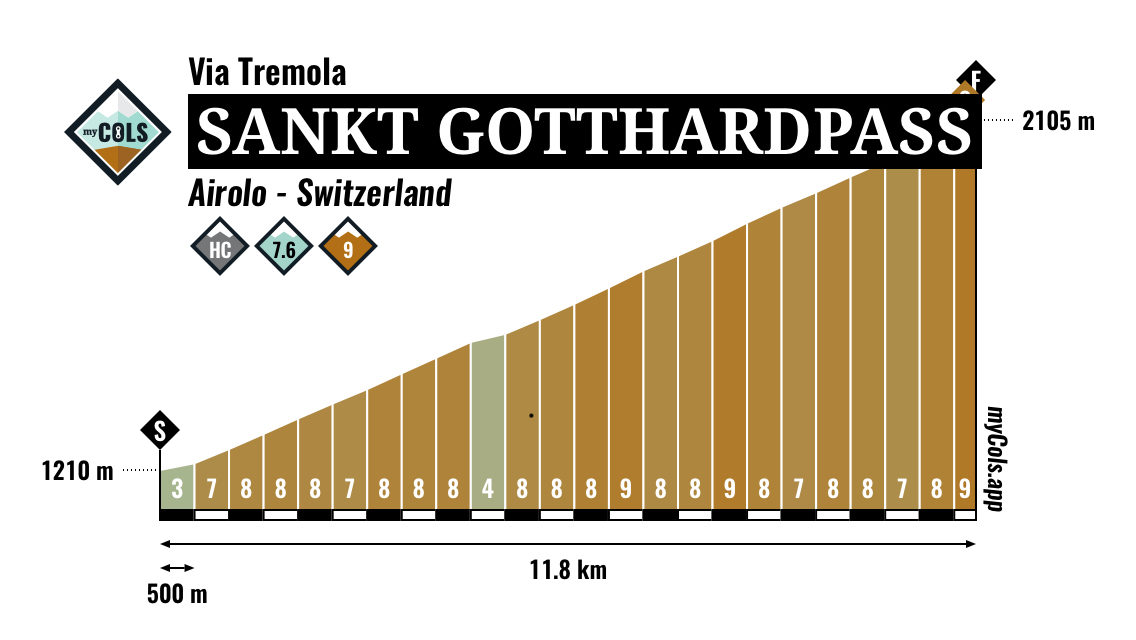 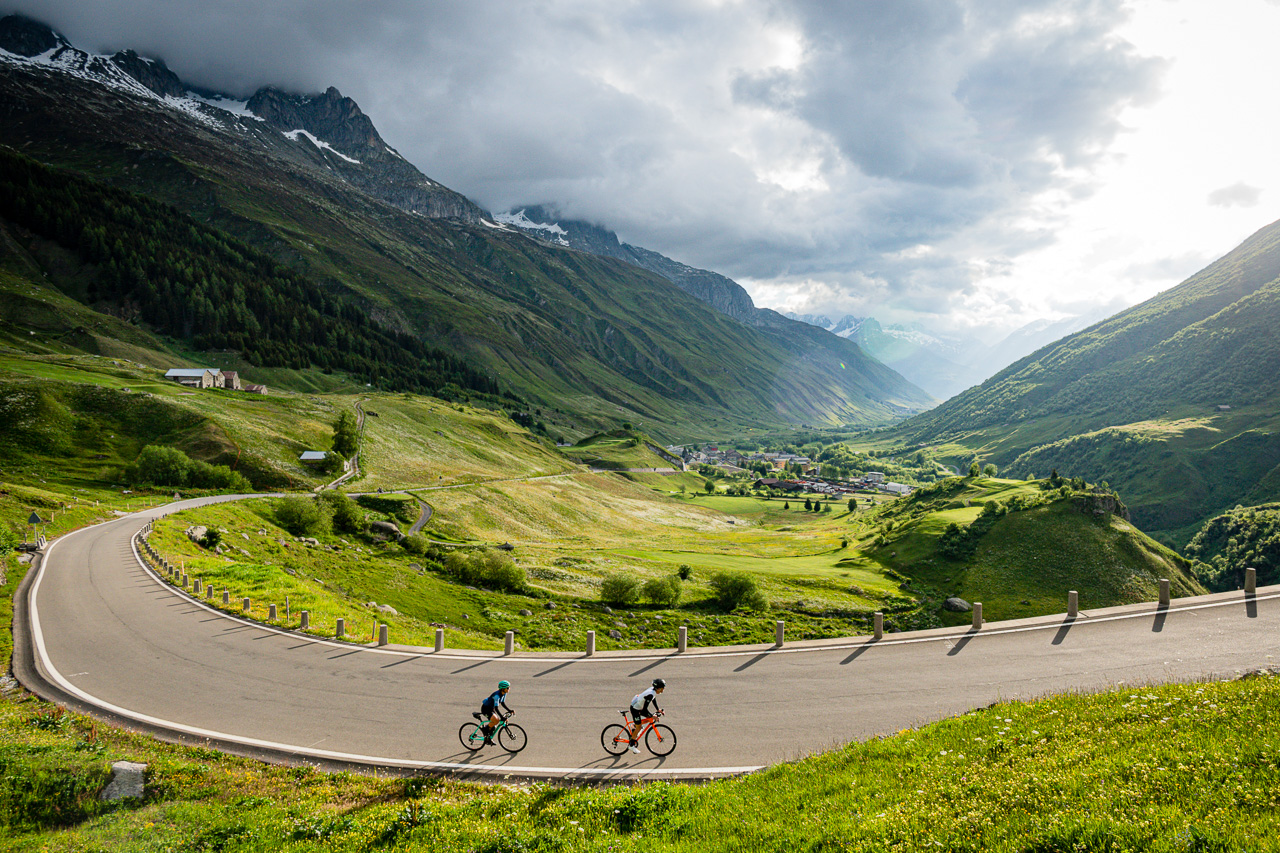 The first slopes leaving Realp are quite gentle 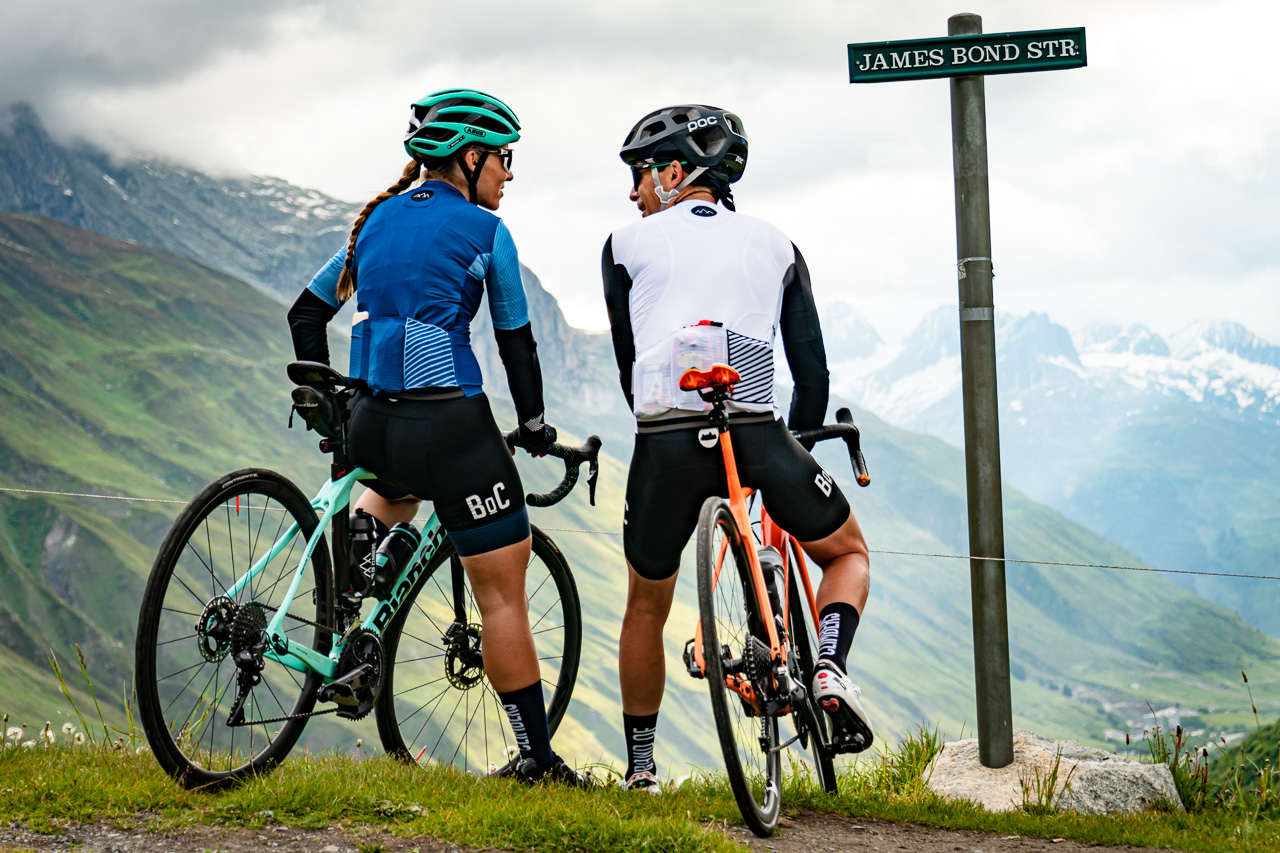 Classic James bond fans may recognise the route. Sean Connery drove over this pass in his Aston Martin DB5 in the film Goldfinger 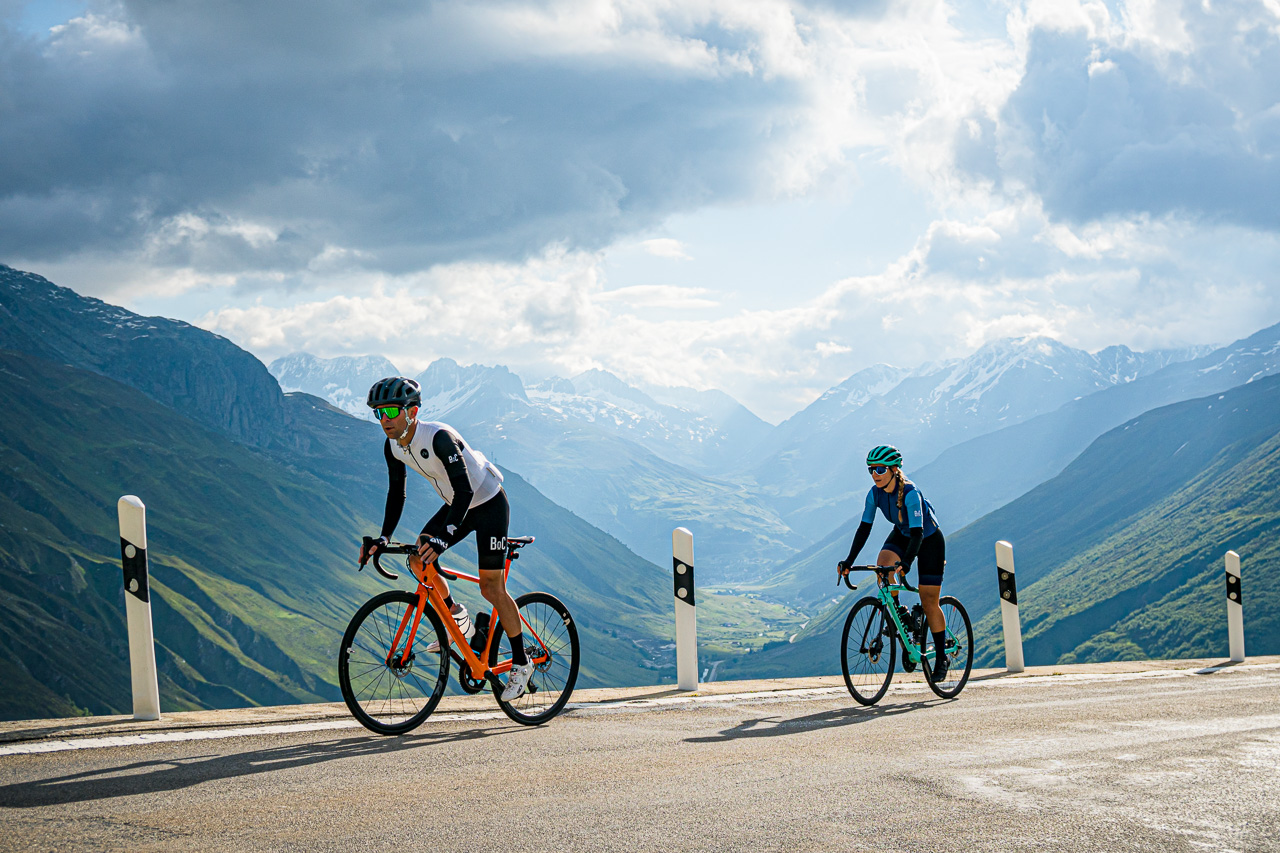 As you gain elevation, the high peaks of the Alps begin to surround you from all directions 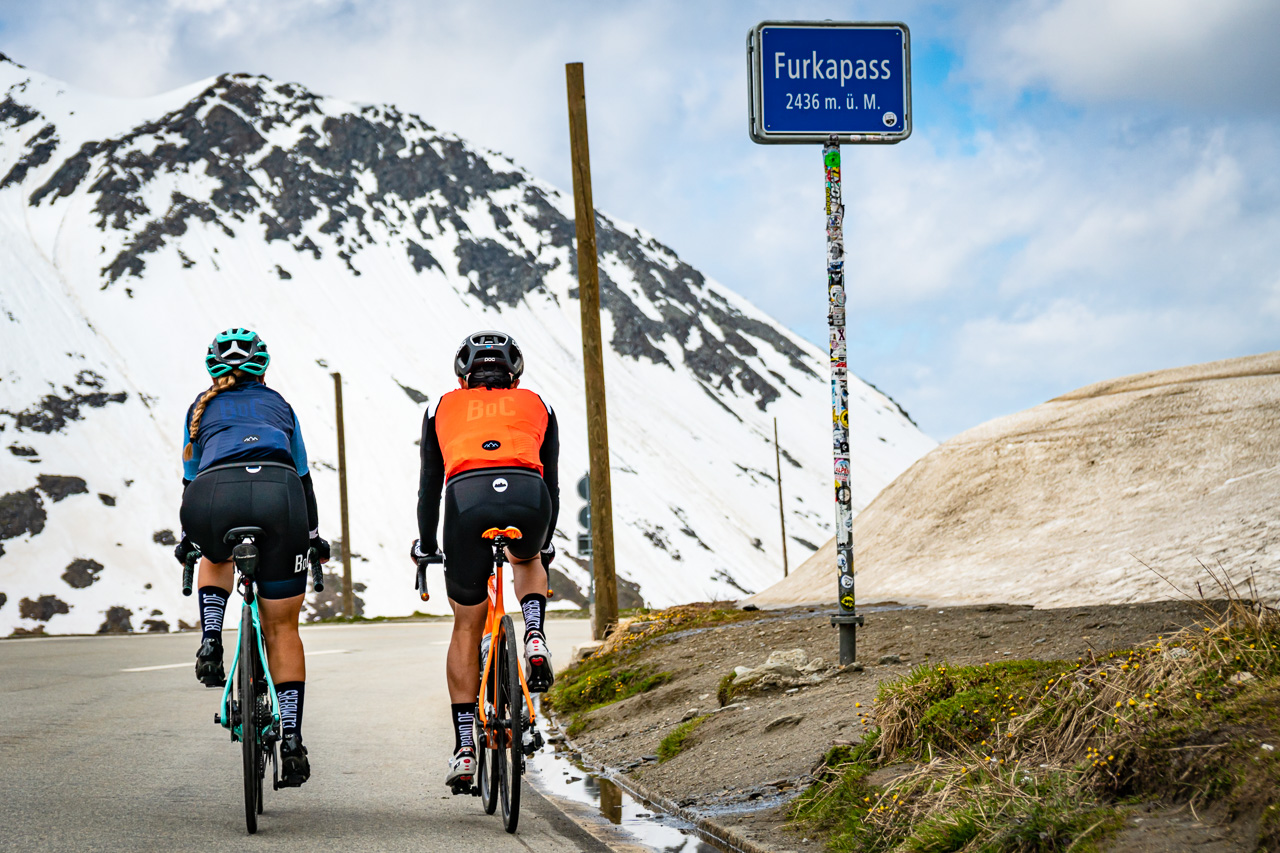 If you climb early season, large snow banks are common. 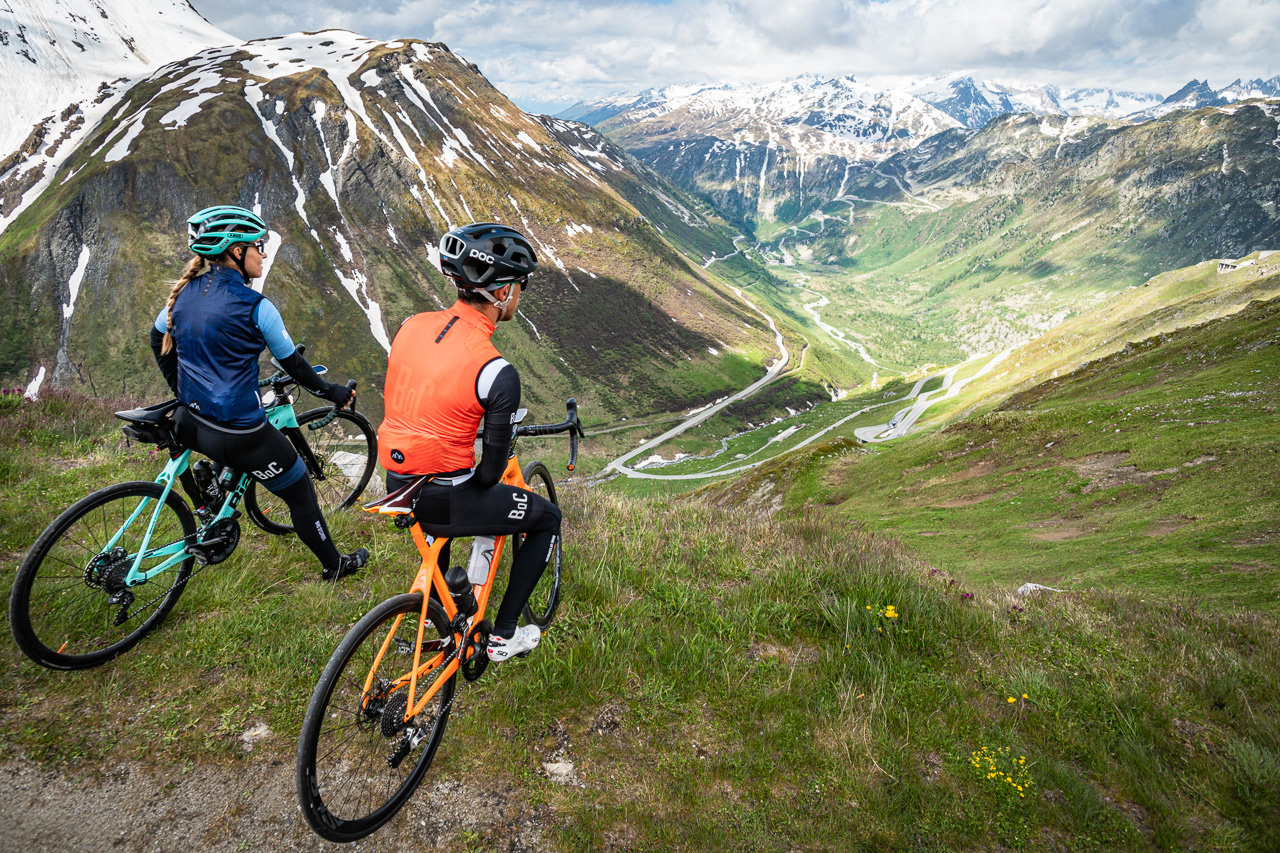 From the top of Furka Pass, the tempting switchbacks of the Grimsel Pass come into view 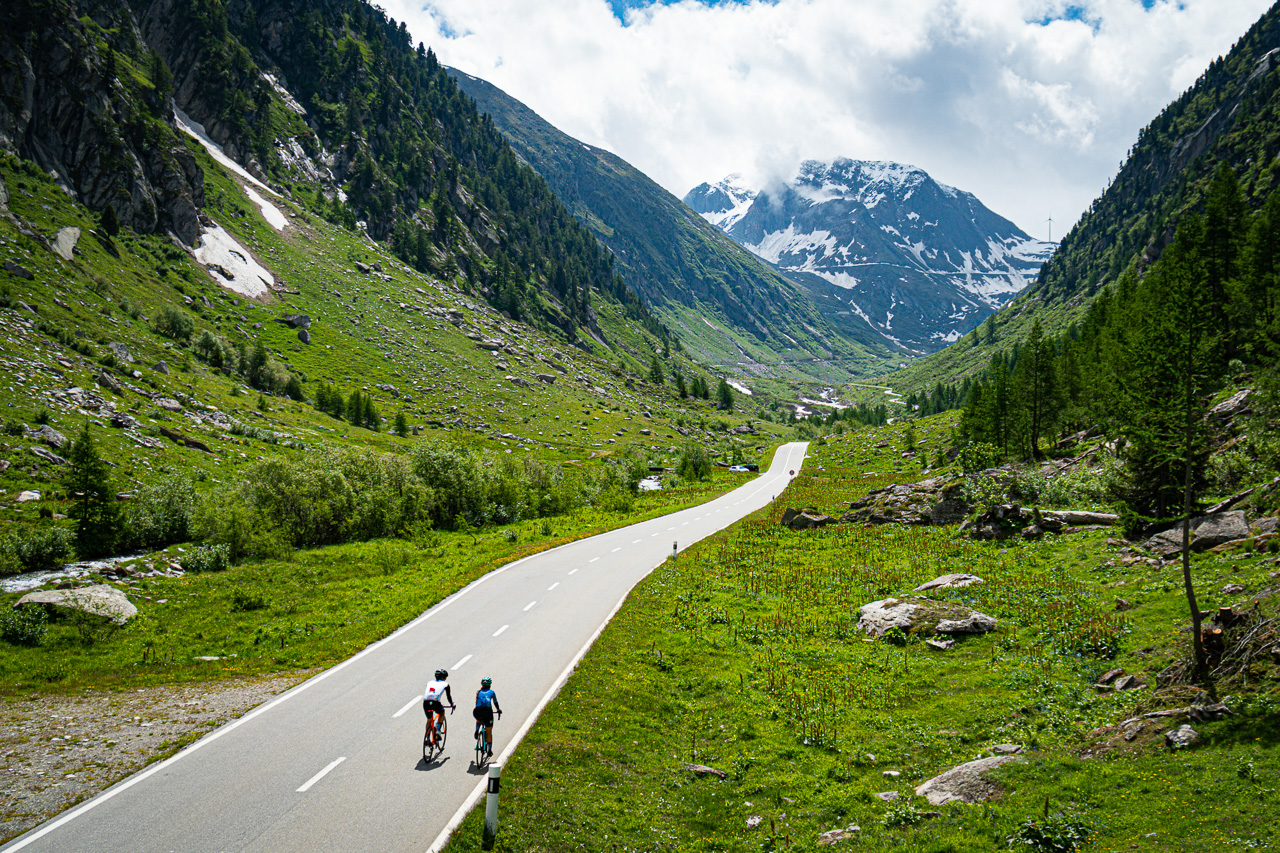 The start of the climb to Nufenen pass 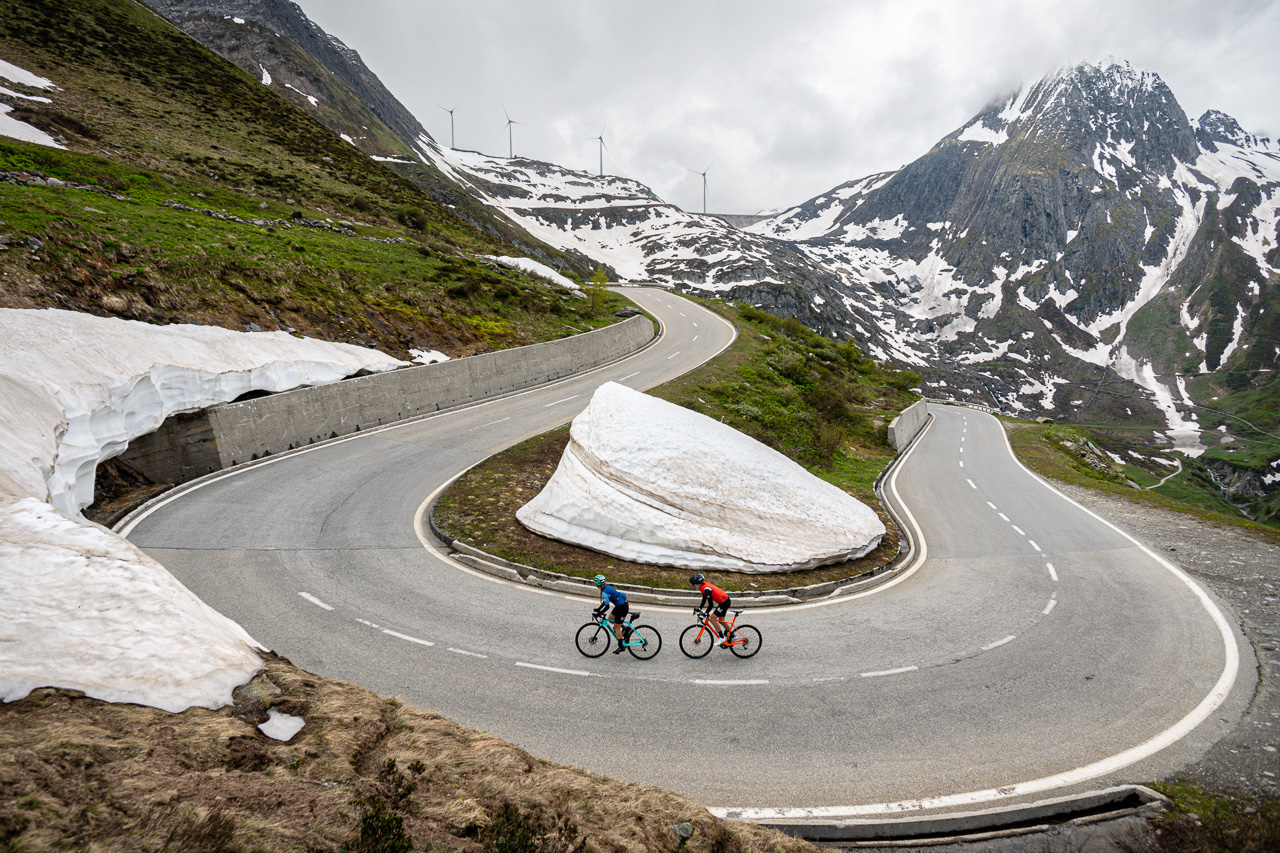 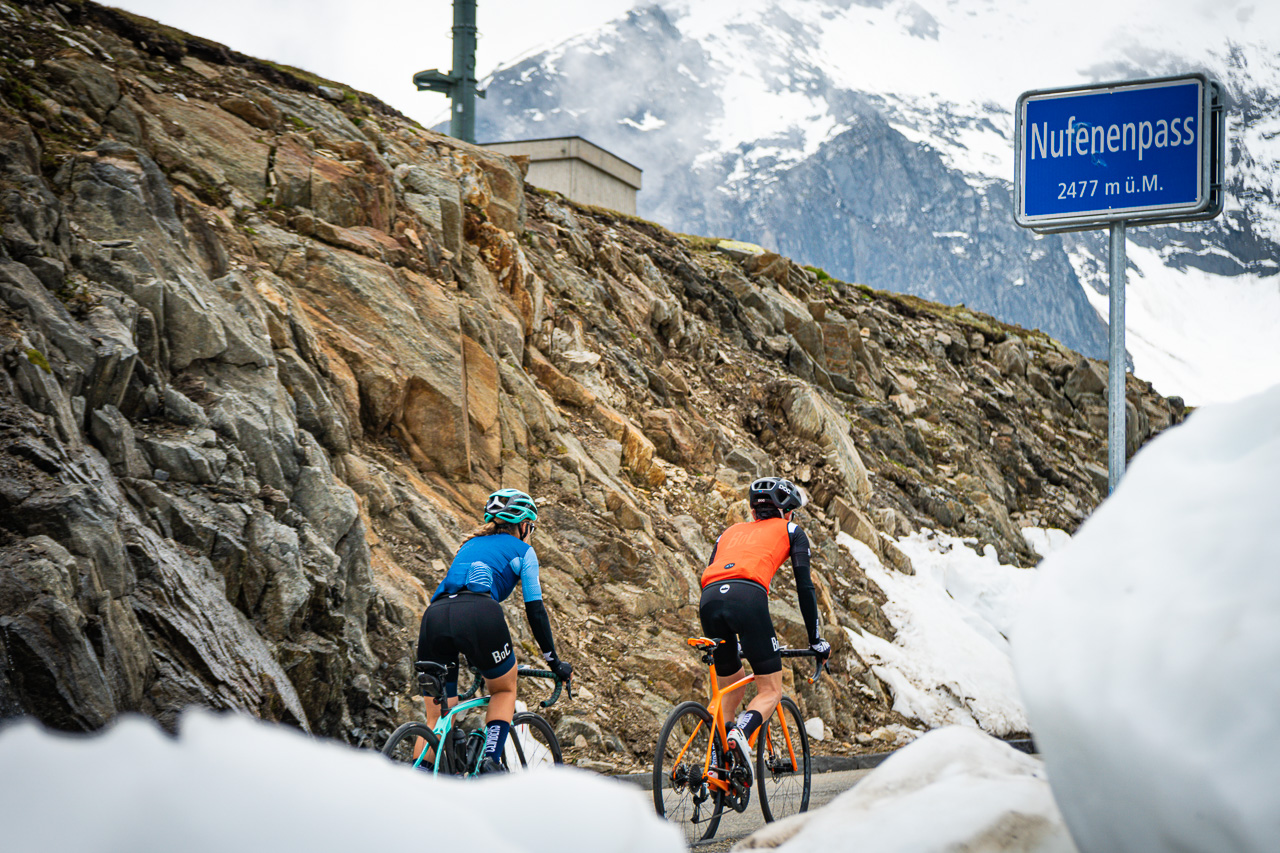 Nufenen Pass is the second highest road pass in Switzerland. Snow can stay here for a long time 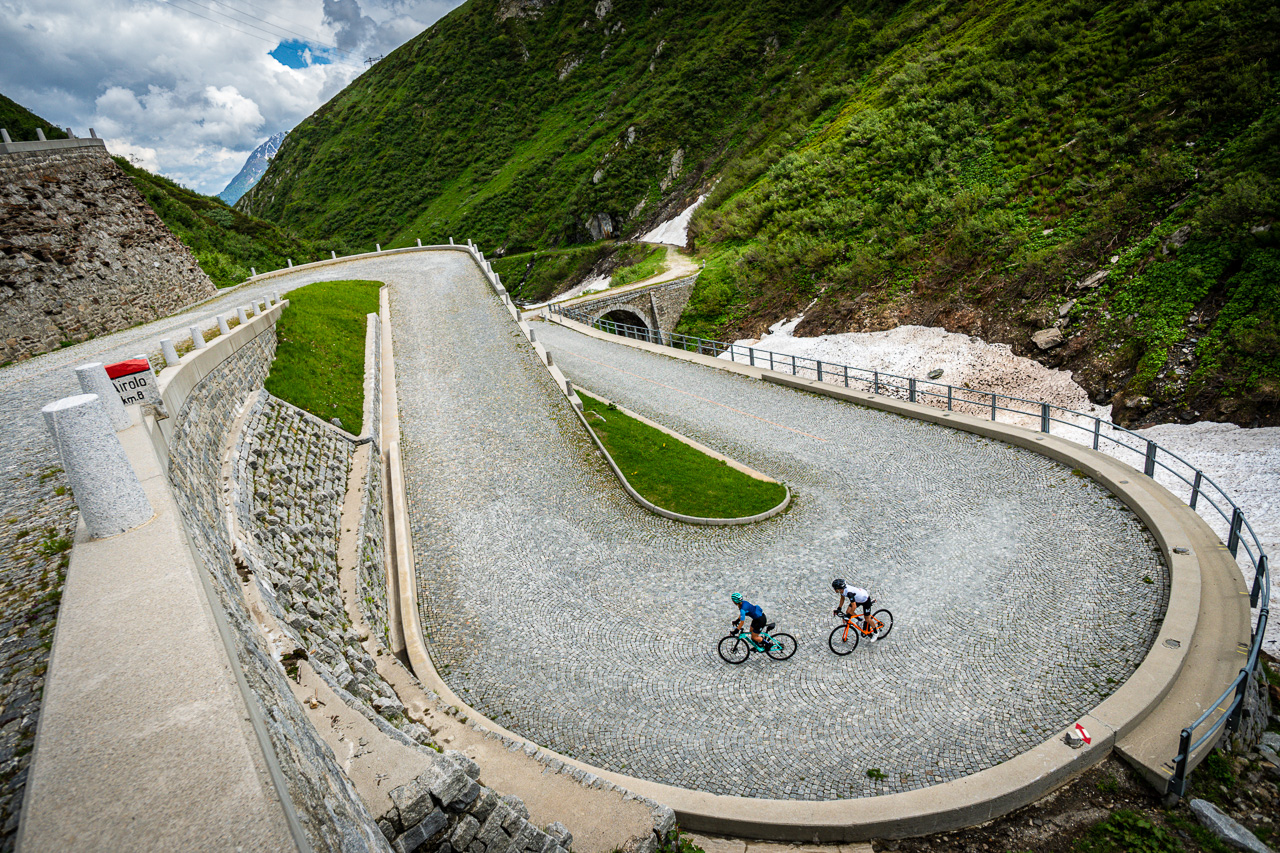 The famous Tremola section of the Gotthard Pass feature beautifully crafted switchbacks that date back to the 19th century. 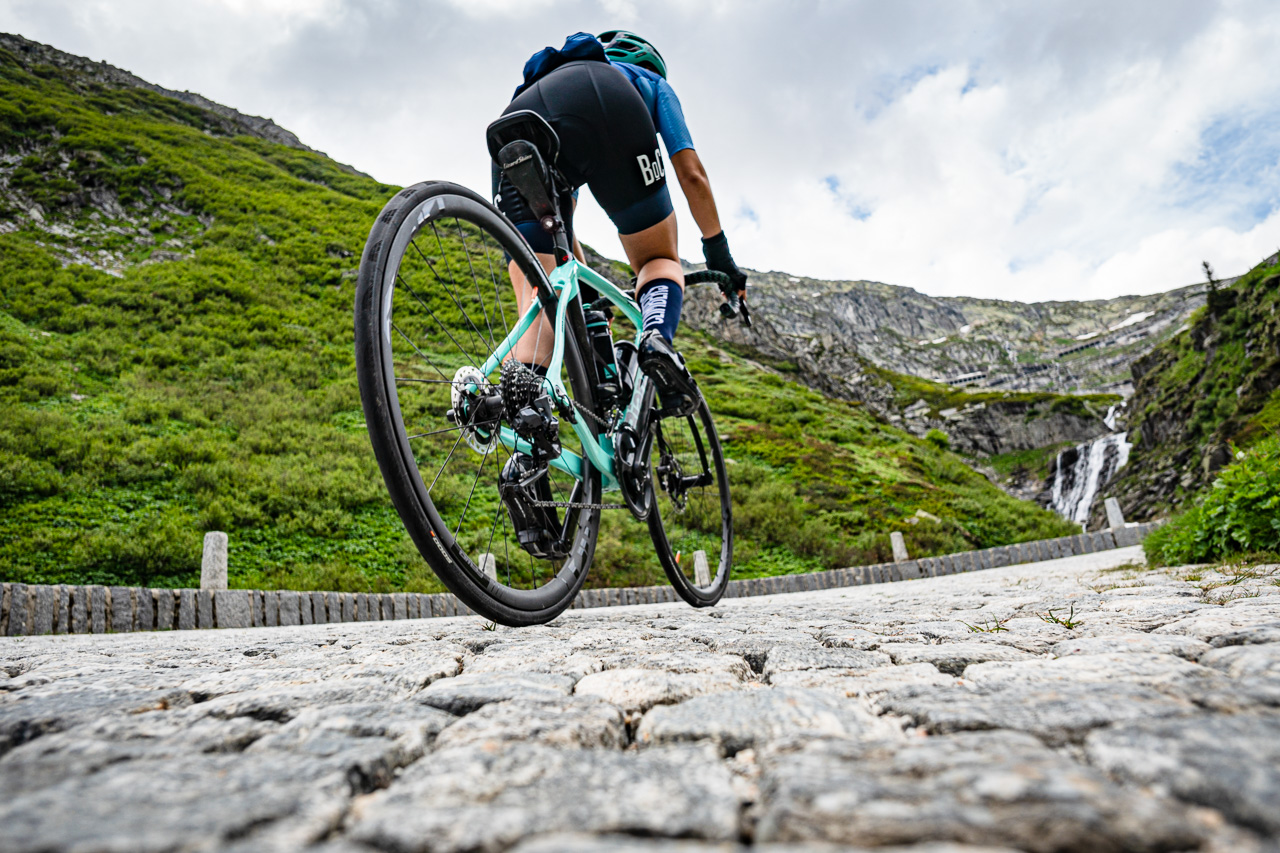 While the slope is not steep, the climb feels endless as the cobbles seem to fight back against your efforts of forward motion. Not that we mind too much as we enjoy the extra time to absorb the scenery 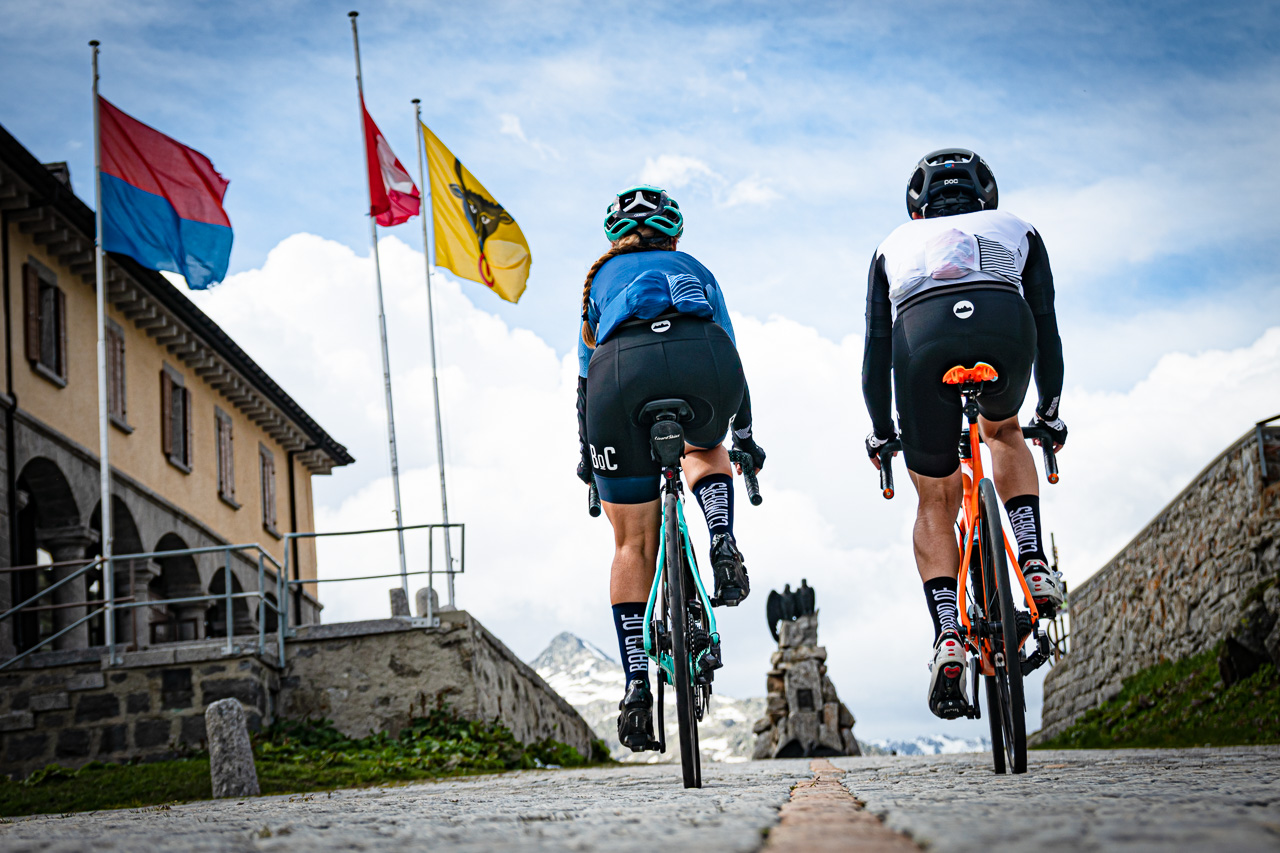 At the top of the Gotthard Pass, a monastery of some form has existed since the 13th century. Now several buildings welcome you with a museum, food and drinks.