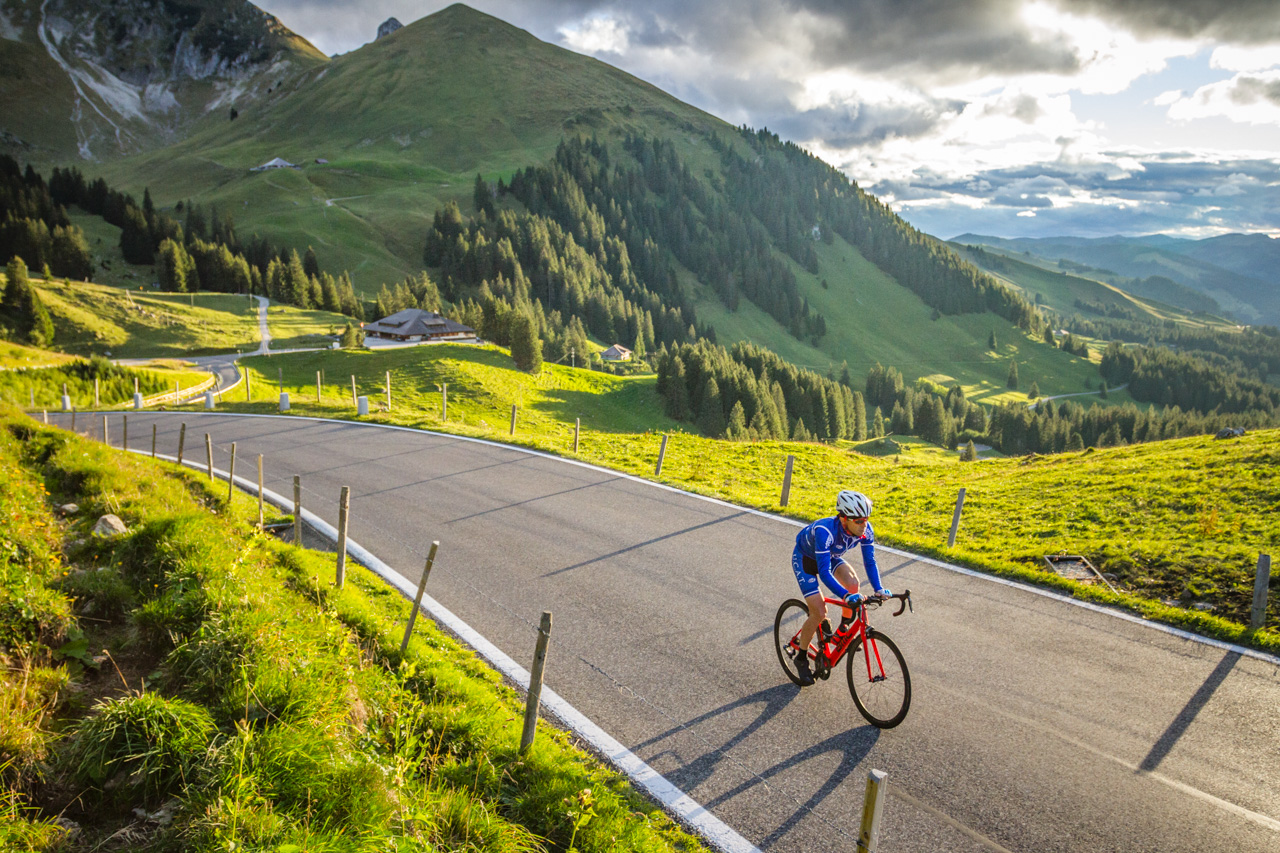 This loop of medium difficulty takes you through the Cantons of Bern and Fribourg over the Gurnigel Pass. Don’t miss it if you are staying in the Interlaken area to ride the Grosse Scheidegg, the Grimselpass or the Sustenpass. It is also perfect for spring or autumn climbing, when the high alpine passes are closed or too cold to climb. The Gurnigel pass is popular with the local cyclists and was climbed only twice by the Tour de Suisse: in 1963 and 1997.

You quickly leave Thun to head for the mountains via back roads and meander through farms in the countryside.

At Wattenwil, the first ascent of note climbs 270m to reach Burgistein. The road continues to climb gently to Kalchstätten (km 38), where you start to see the peaks of the Prealps.

A short descent leads to the bridge over the Sense River, a gateway to Canton Fribourg. Another gradual rise makes its presence felt, heading, at first, towards the Schwarzsee after Plaffeien.

At km 49, you fork left. Here the road becomes steeper and prealpine pastures appear. After tackling a gradient averaging 5% for another 16km, you reach the summit of the Gurnigel (1,609m).

This doesn’t tell the whole story, though. The ascent actually comprises a number of level sections interspersed with steeper ones. Alain once climbed the pass with 2008 Olympic road race champion Nicole Cooke and his legs  confirmed it...

The descent begins in the forest before entering open countryside and finally returning to Thun via charming little roads free from traffic.

This loop is part of the “Top Road Cycling Routes” created by Alain for the Switzerland Tourism website. 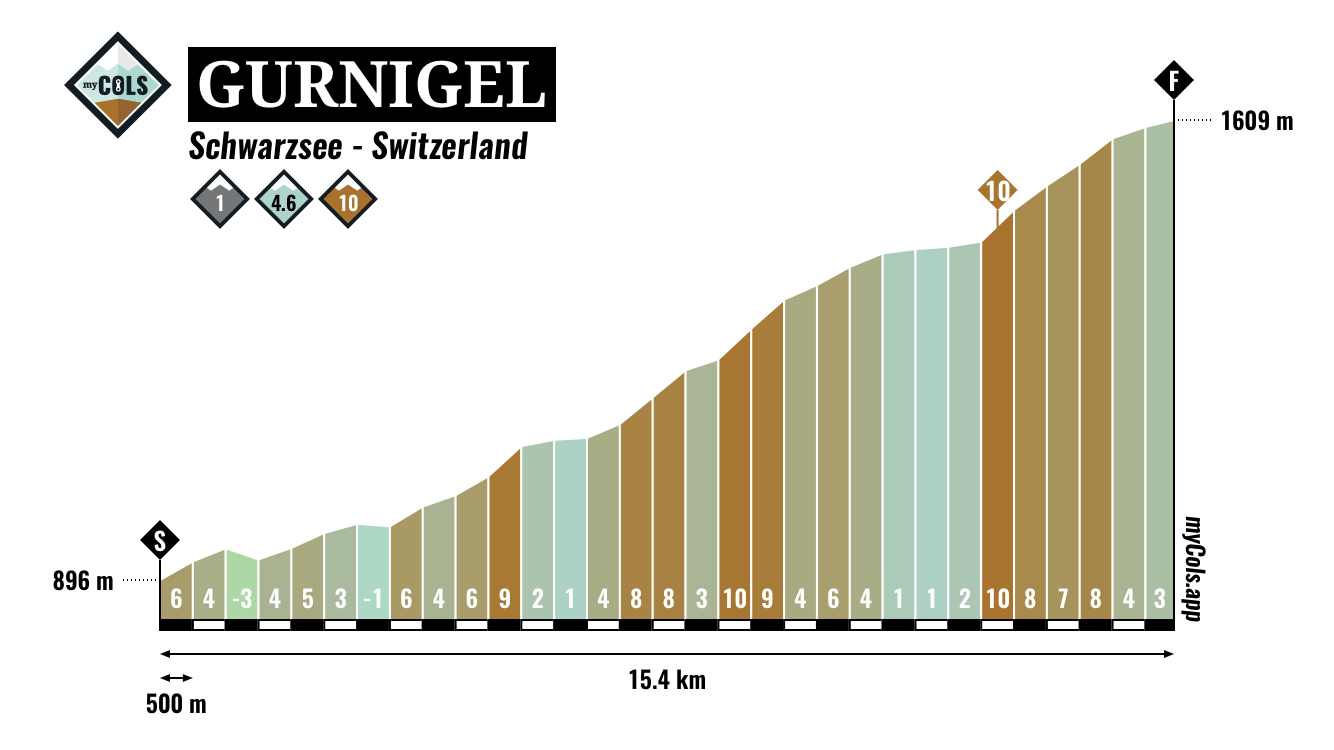 At the summit of the Gurnigel, look right for commanding views of Lake Thun with the Bernese Alps in the background. The inn at the point where the descent begins is a good place for a break. 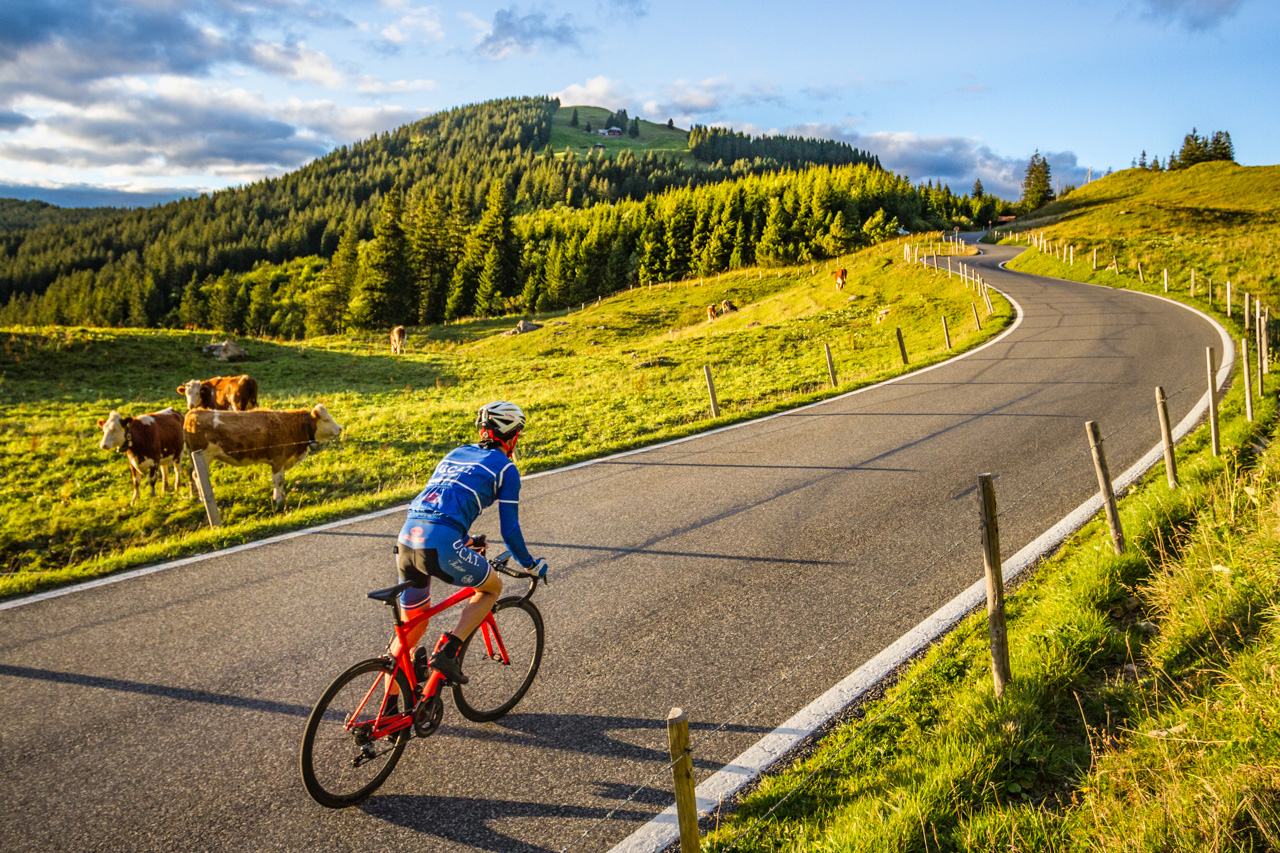 On an evening ride, you'll only see cows on the way up 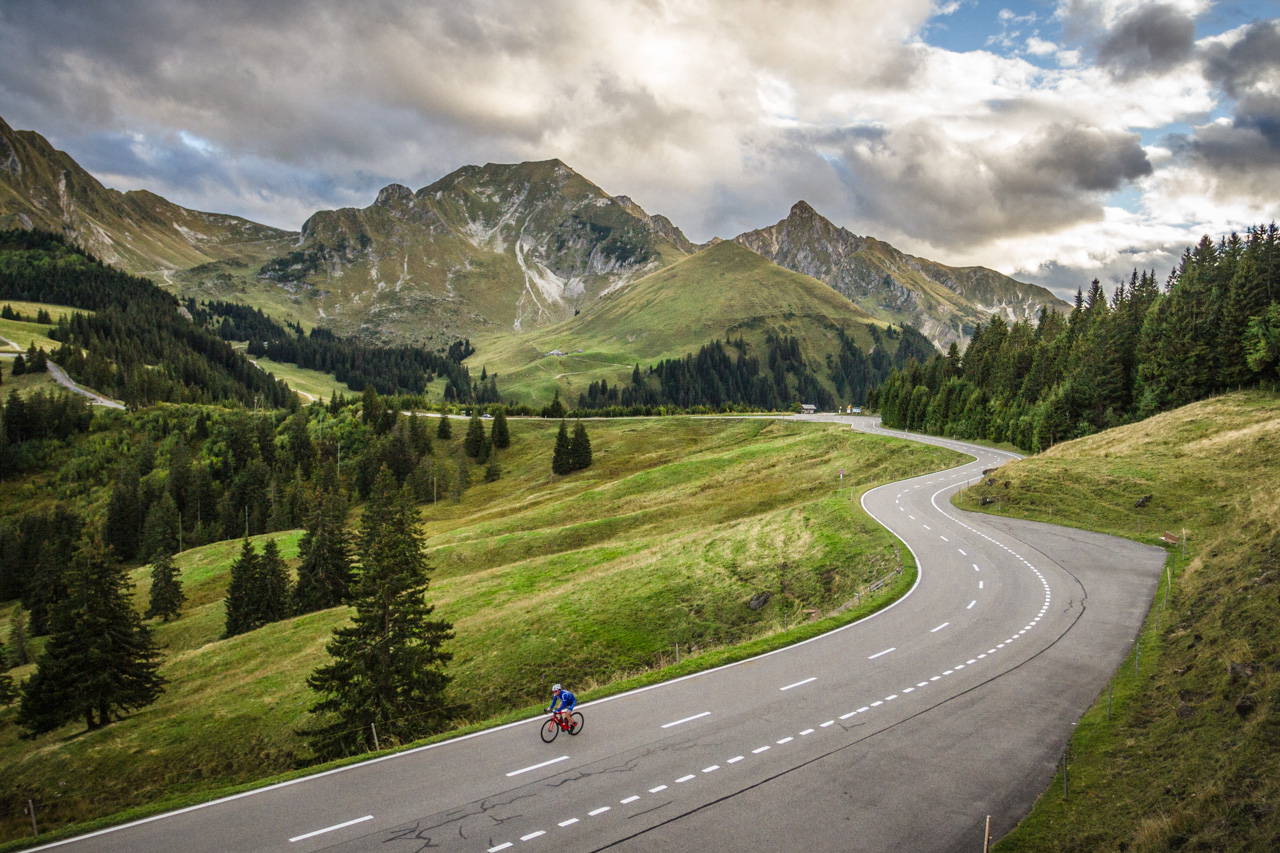 Approaching the top with the Préalpes fribourgeoises in the background 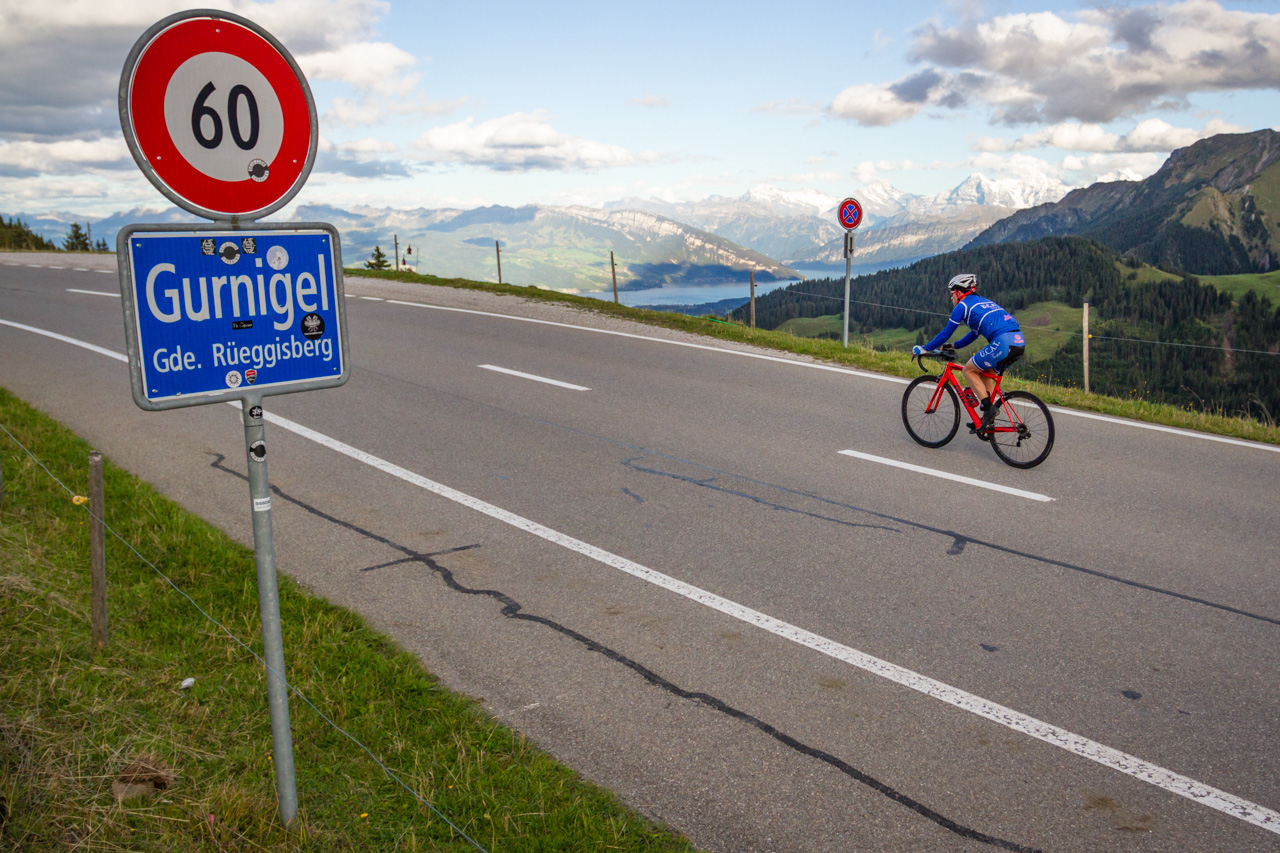 Lake Thun appears way below as you get to the top 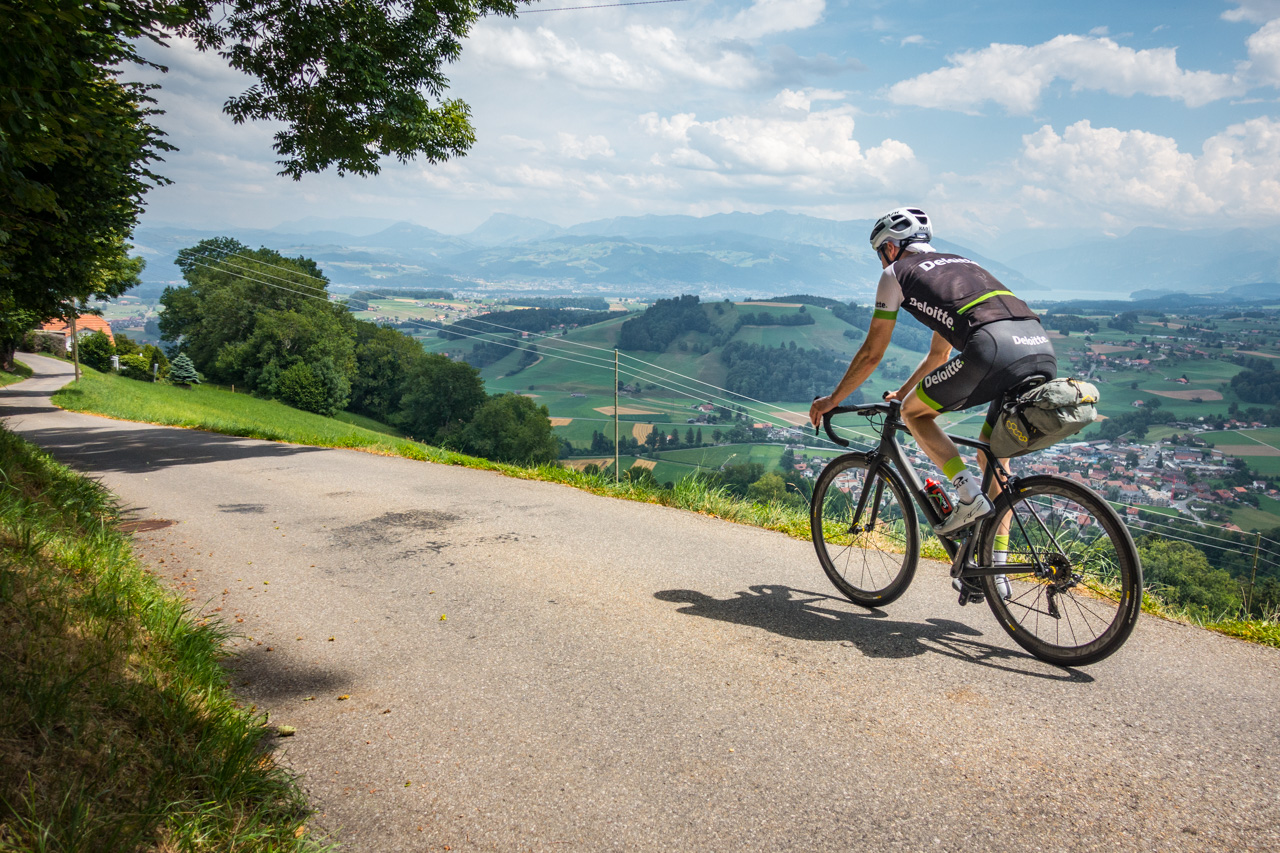 Heading down to Thun on a bikepacking trip across Switzerland