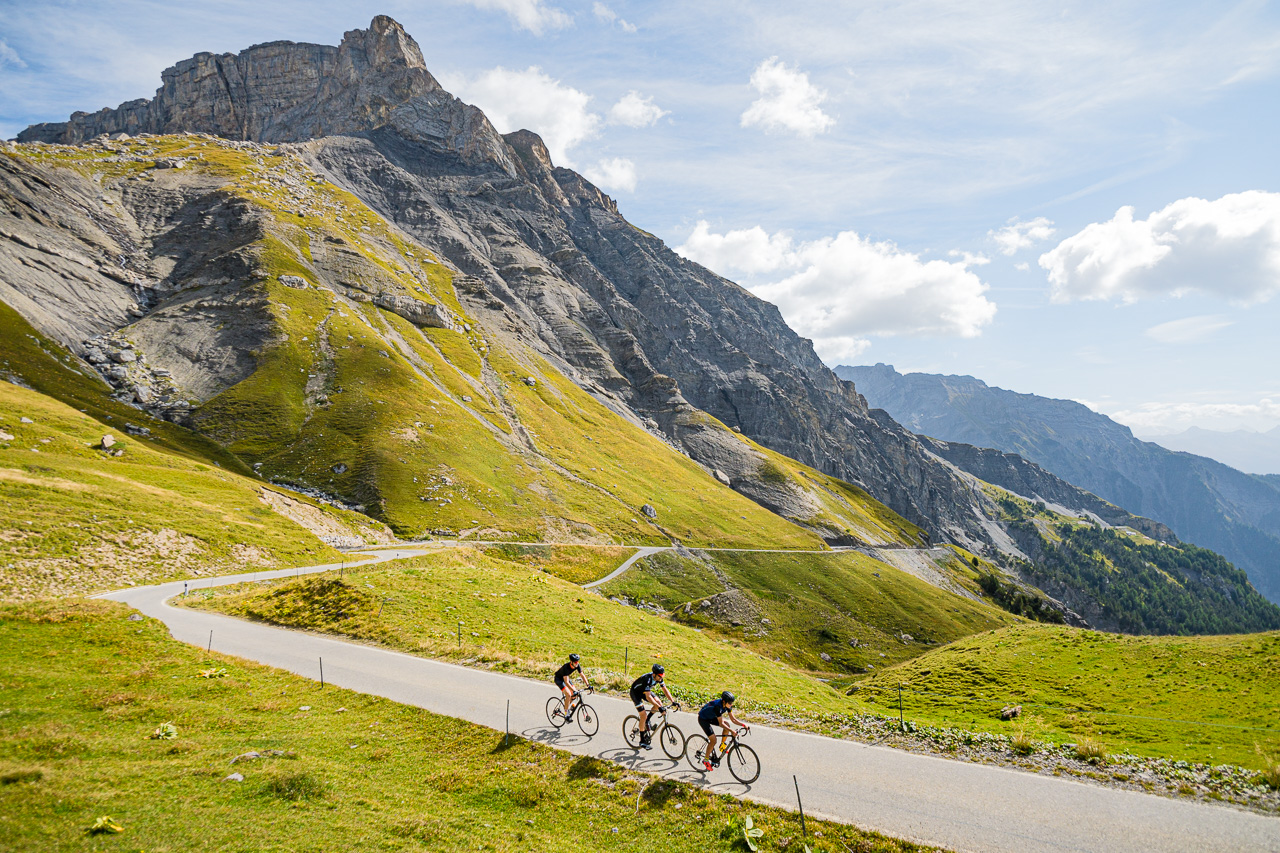 The Sanetsch Pass: like the famous Stelvio, but with less traffic

Chances are, you’ve never heard of the Sanetsch Pass in the Swiss canton of Valais. Don’t be ashamed: no pro race has ever been there, and it’s a dead end. Nothing to make it popular amongst cyclists. But there’s more to this pass, which may be my favorite climb in the world.

The ascent of the Col du Sanetsch starts in the Rhone valley and meanders through the vineyards of Valais, Switzerland’s largest wine-producing canton. After a short flat section, you enter a narrow valley with some steep sections. You have climbed more that 1,000m by now but it’s far from over. In fact, the best is to come. A few switchbacks later, you reach the high pastures, surrounded by the tall peaks of the Sanetschhorn and the Arpelistock. Some more switchbacks and you enter a dark and humid 800 meter tunnel across a rocky face. Most of the time, it is lit. One day, it was not and I will always remember my slow, blind walk in the dark, bumping from time to time into the tunnel walls. So, be prepared and take a set of lights when climbing the Sanetsch.

The last kilometres after the tunnel are endless but you finally reach the summit at 2,252m, near the Glacier de Transfleuron. Yes, that’s more than 1,700m of climbing. In 25km. The Swiss equivalent of the famous Passo Stelvio, without the endless flow of camper vans, cars and motorbikes around you. How's that?

Sanetsch Lake, a few kilometers beyond the summit is the end of the road. Does that mean having to turn back? No: you can hook your bike onto a cable car and go down 1,000m to Gsteig near Gstaad, in the German speaking part of Switzerland. You then climb to the Col du Pillon (1,546m) and make for Les Diablerets before arriving back on the Rhone valley floor at Aigle. After that, you have two ways of returning to Sion: take the train, or ride back for 55km on the wonderful flat cycle path along the Rhone.

If you need more convincing, listen to what Mike Cotty from the Col Collective said as we were shooting this video on the Sanetsch:

"I’m having these flashbacks. The length of something like the Madeleine... the Grandes Alpes. You’ve got crazy steep pitches like [Monte] Grappa, narrow roads like the Gavia, the wilderness and openness of the Bonette. The list goes on, and when I put them all together that’s really the uniqueness that makes the Sanetsch so special."

All right, now there's one more climb on your bucket list.

You can ride the Col du Sanetsch as part of a 4 day self-guided tour that includes other great climbs such as the Col du Lein, the Col des Planches, the Emosson dam and the Petite Forclaz. Click here for more information. 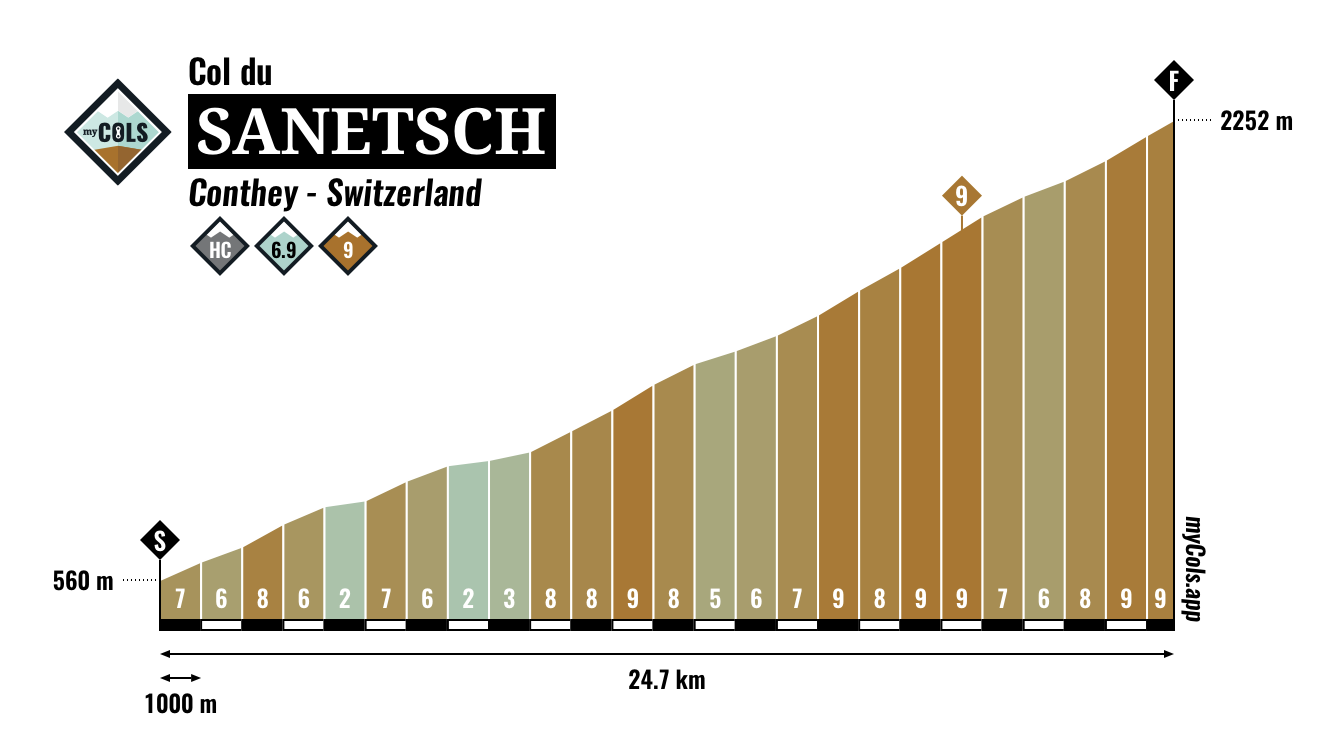 Bring warm clothes, even if the forecast promises fine weather in the Rhone valley: temperatures can drop more than 15 degrees during the ascent.

Also, you will climb for 2 to 3 hours so make sure you fill your bottles at the last restaurant before the top at km 19.

The Sanetsch-Gsteig cable car operates between June and October. The timetable may be found here. 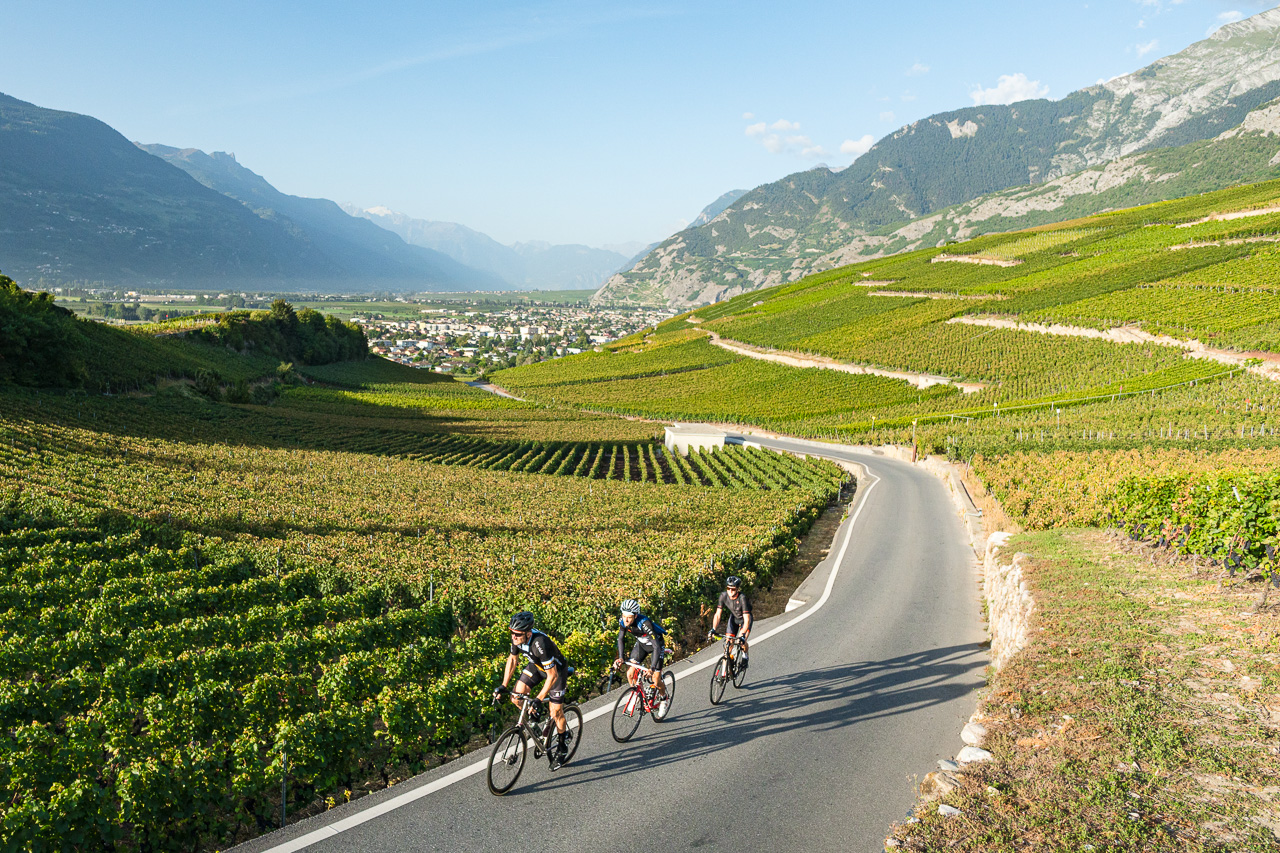 Starting the climb in the vineyards of the Rhone valley 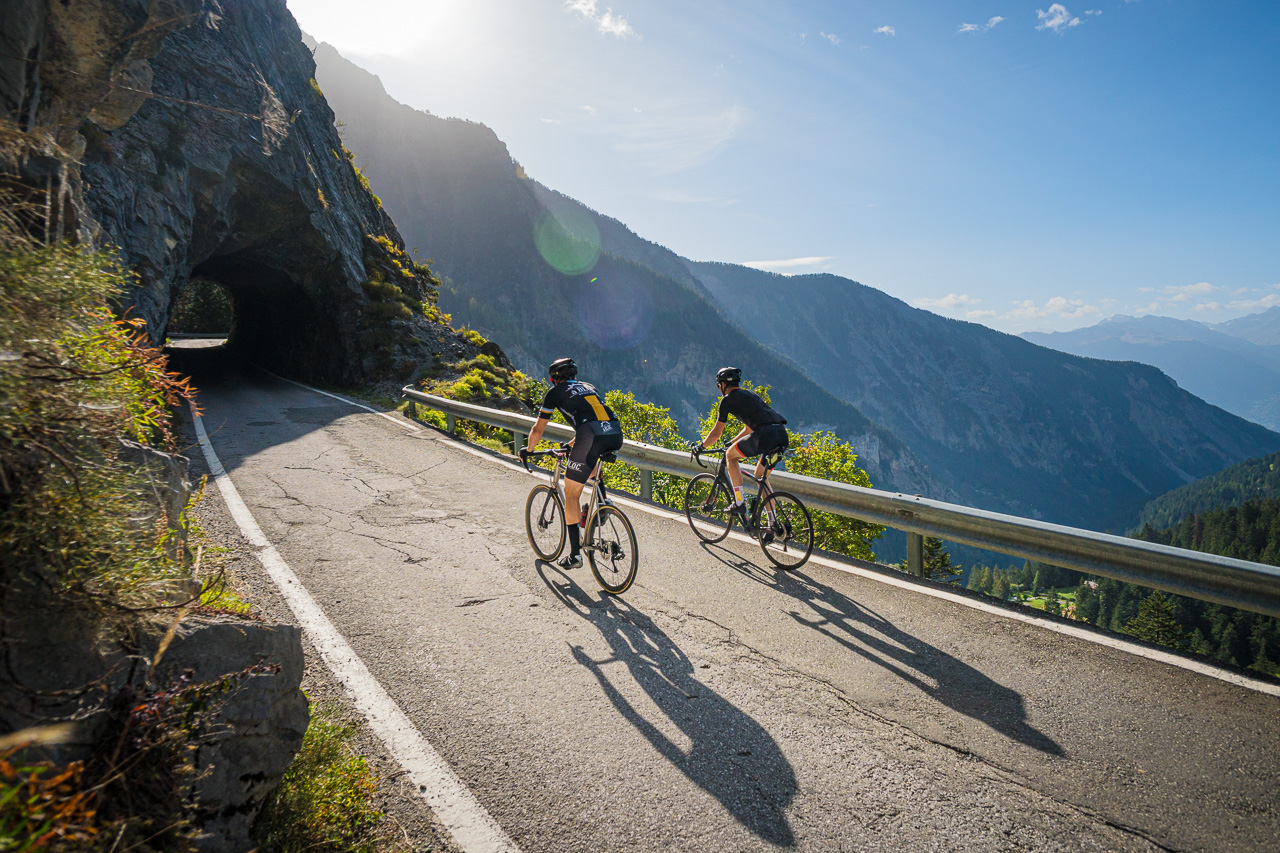 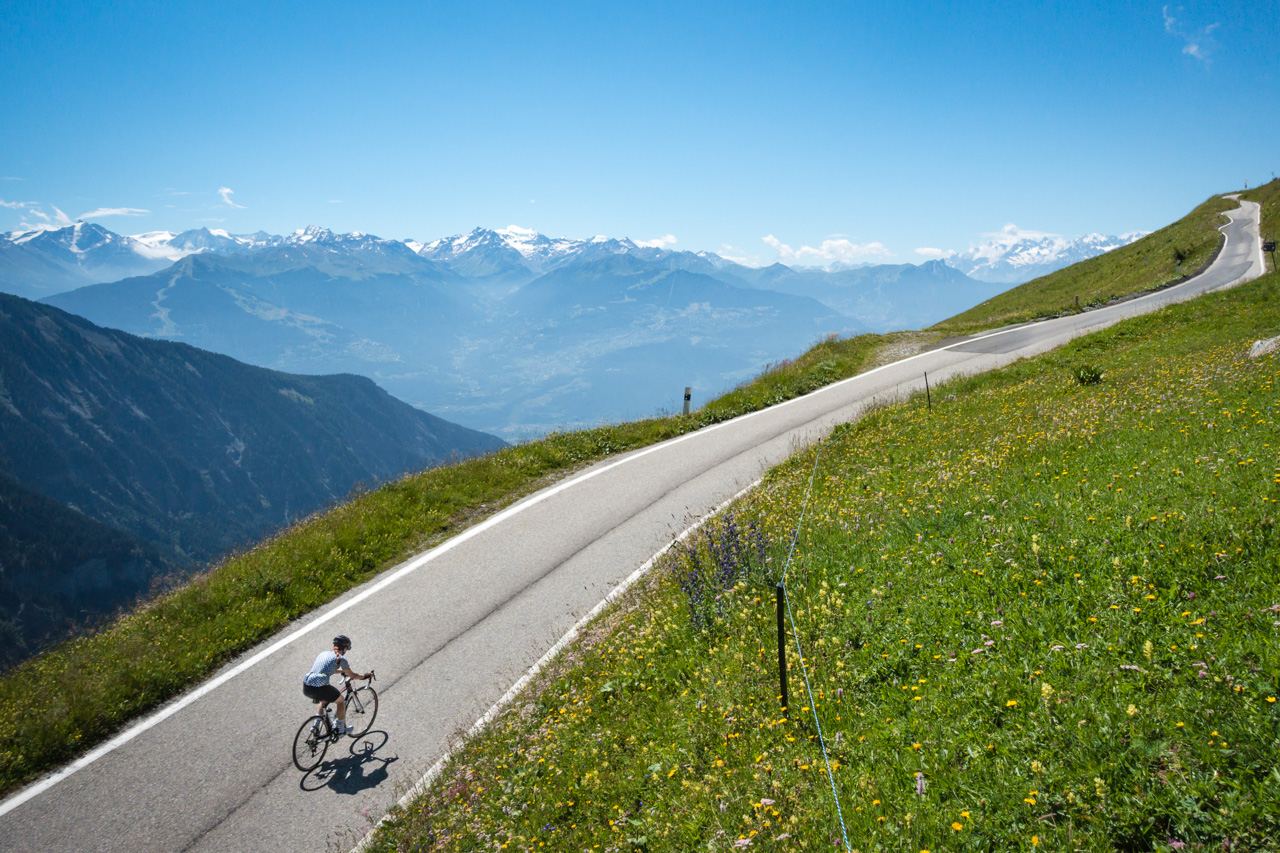 Big views on the Alpes valaisannes 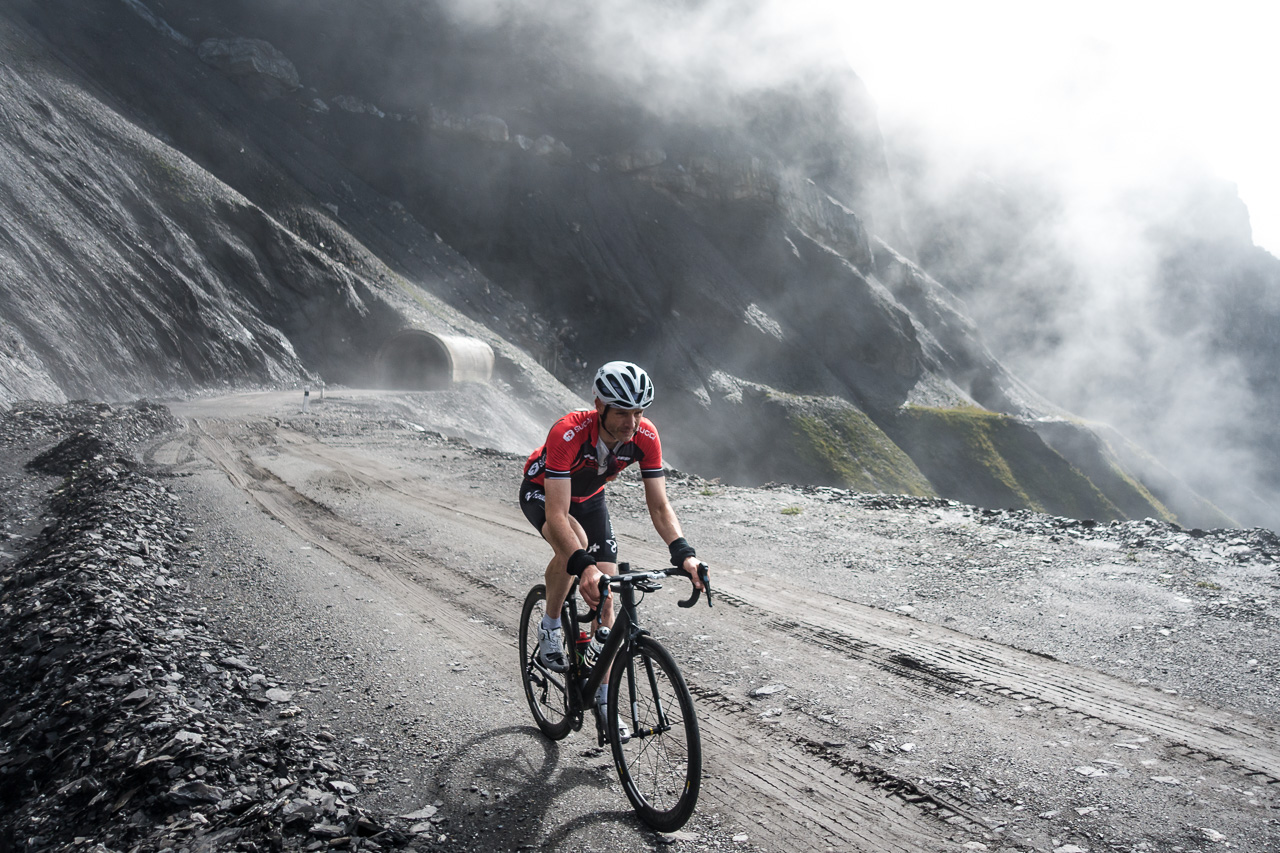 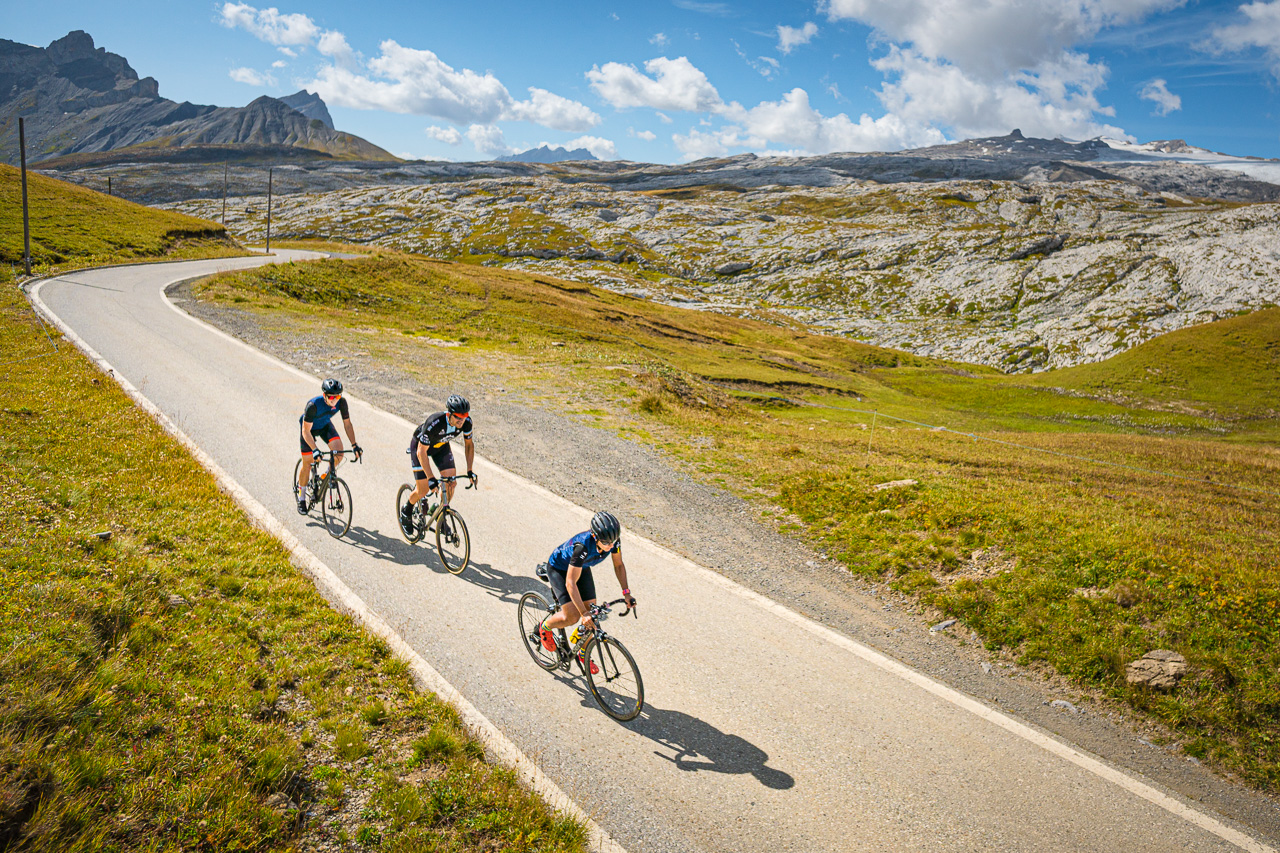 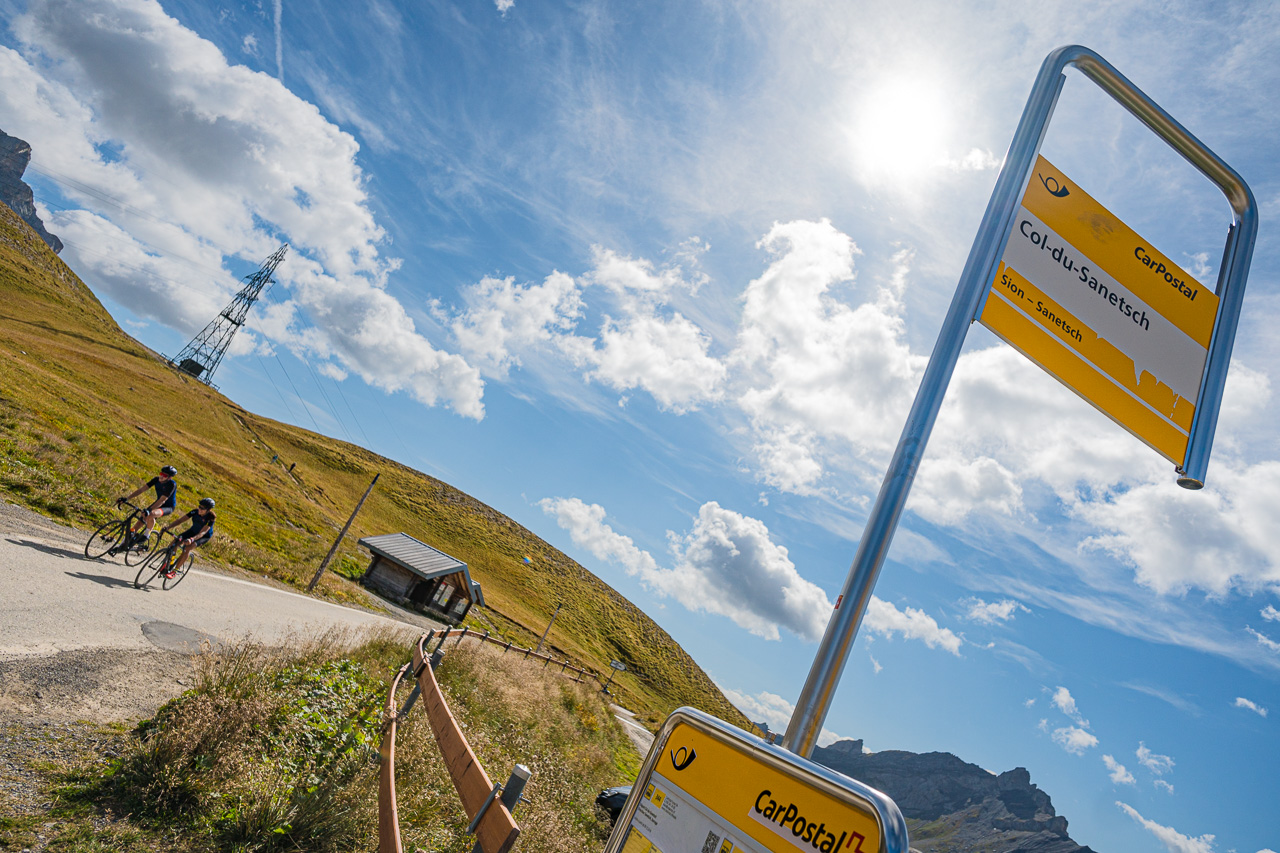 No col sign at the top, just a bus stop 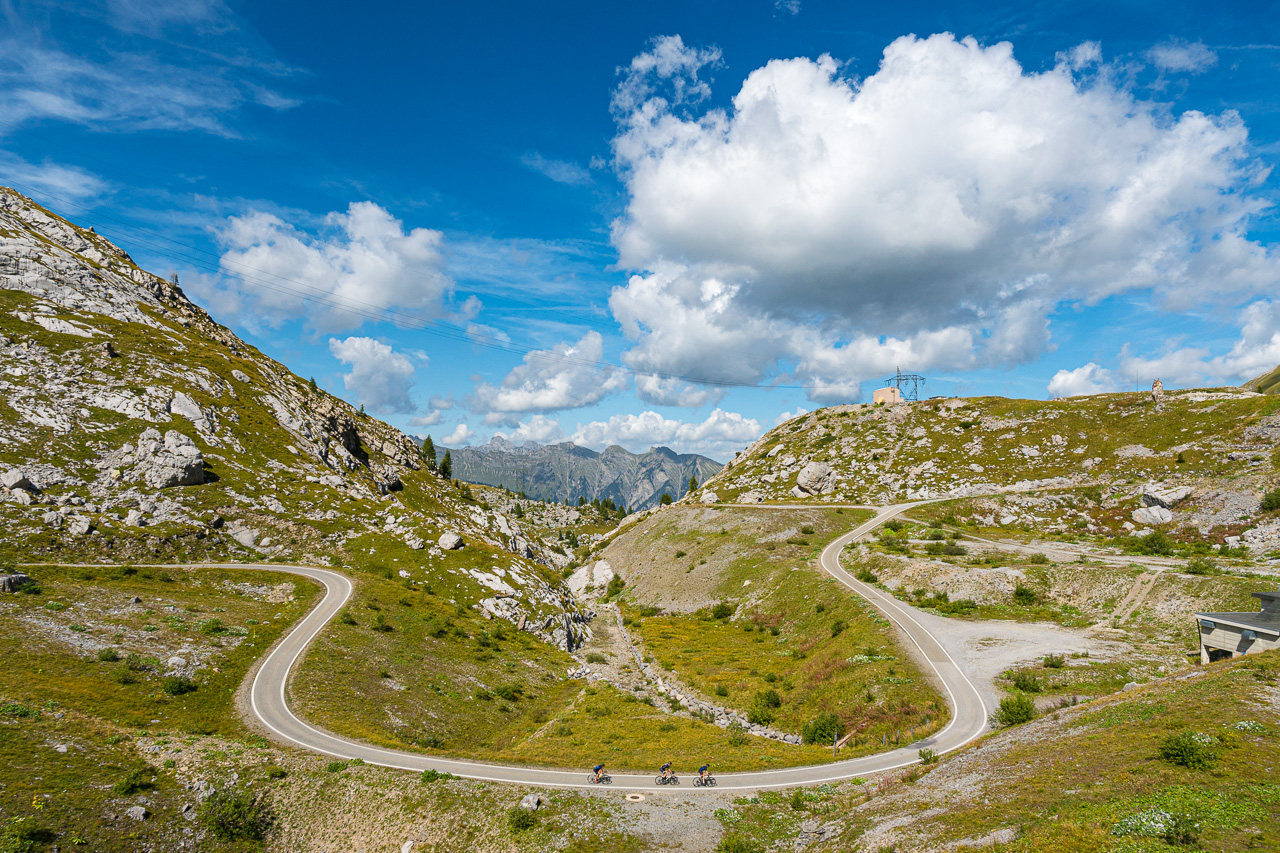 The end of the road is near 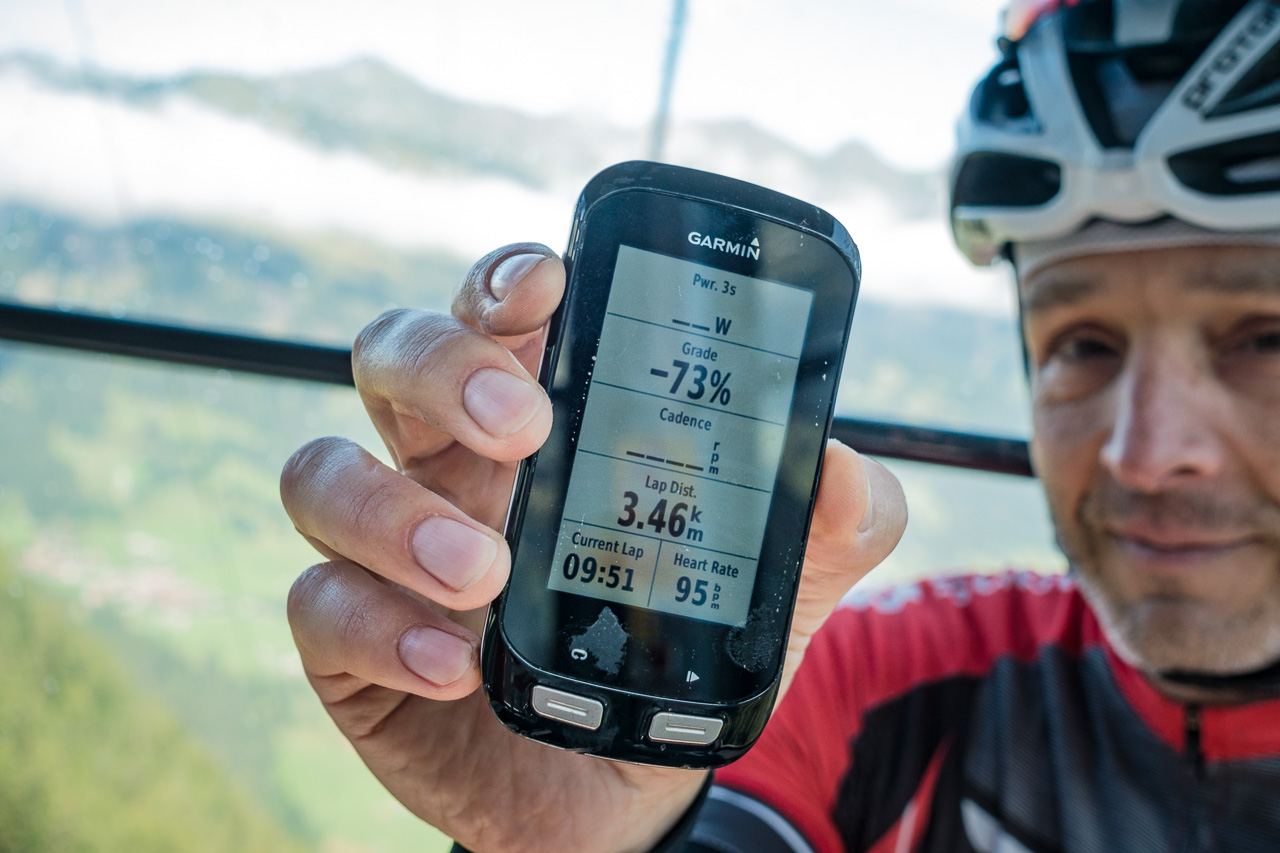 Yes, the cablecar ride to Gsteig is STEEP... 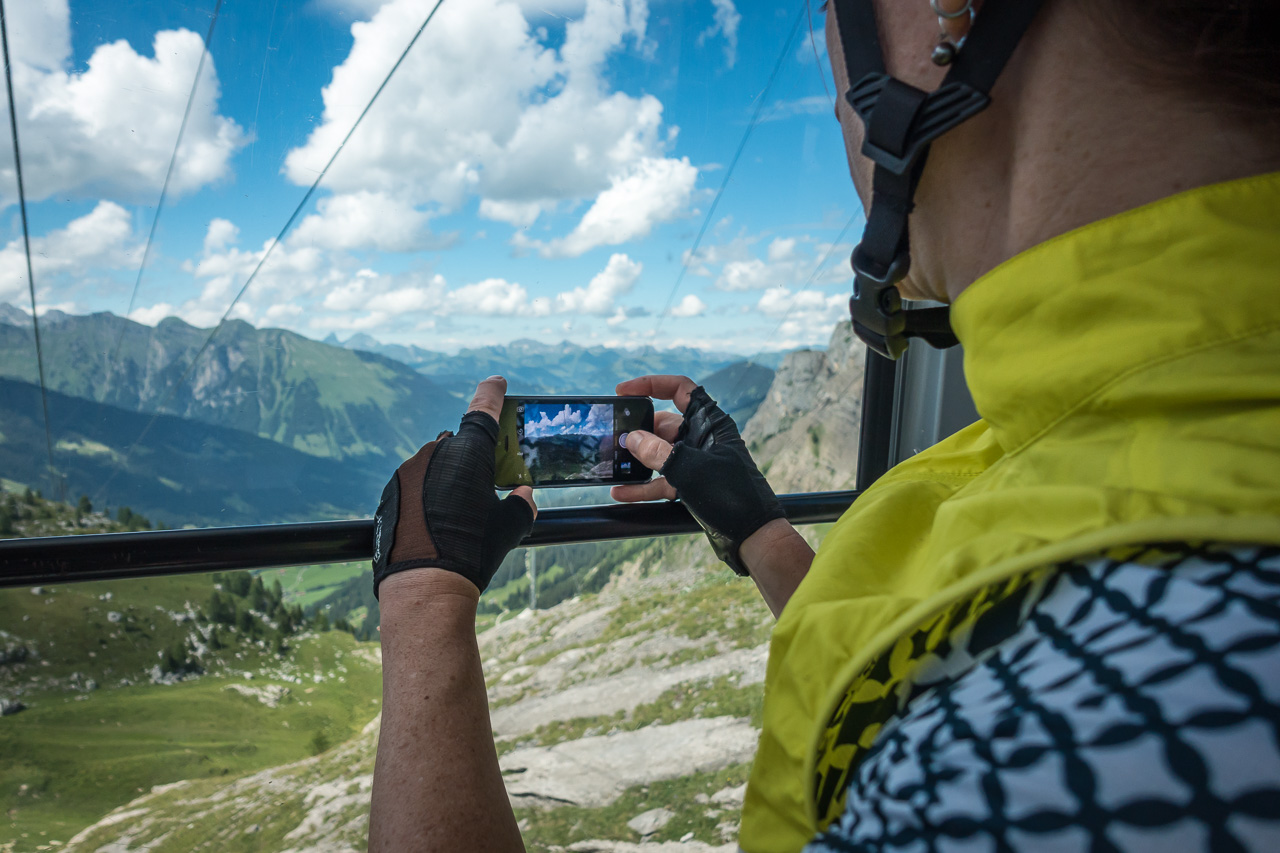 ... but the views are great

MORE ON THIS RIDE

This loop is amongst the "Top Road Cycling Routes" designed by Alain for the Switzerland Tourism website.

The Col du Sanetsch is part of the Haute Route Crans-Montana, a three day amateur stage race launched in 2020. More information on the event here.

Alain also took Mike Cotty of the Col Collective to the Sanetsch. Watch the video: