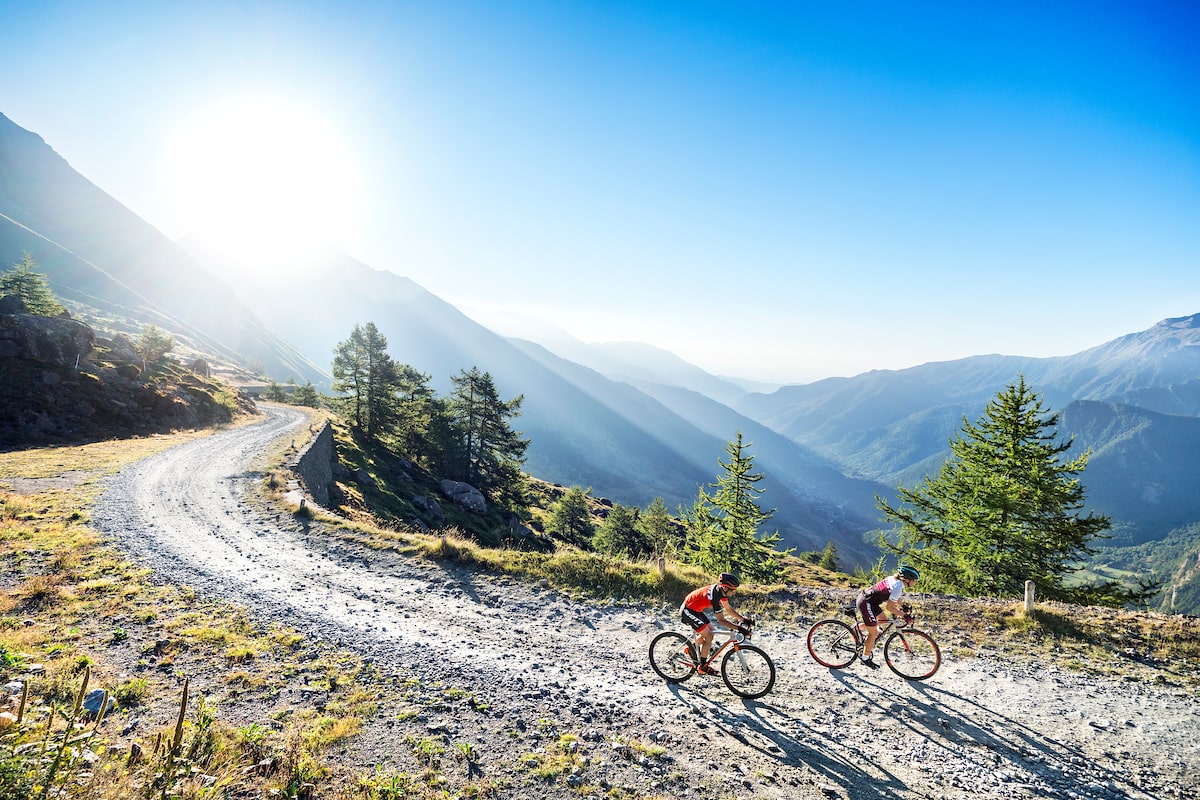 The Strada dell’Assietta is a gravel road in Piemonte, Italy that will blow your mind. Going up and down between 2’000 and 2’500m for more than 30km, this old military road connects the ski resort of Sestrières and the Colle delle Finestre.

You can ride it in less than a day (see this version on ALPSinsight) or you can do it as a two day tour which includes other sections of gravel and asphalt. The start for both days is the eastern end of the Strada dell’Assietta, near the top of the Colle delle Finestre.

The first part of the Strada dell’Assietta winds up to Alpe Assietta. After a short flat section, you leave the Strada at Col Blegier to ride down to Salbertrand through the Parco Naturale Gran Bosco. Be prepared: 1,500m of down on a rough 4x4 trail with 40+ switchbacks are a hard test for the bikes and the bodies.

Once in the Susa valley, take a break in the village of Exilles before the final part of the ride: the climb to the Colle delle Finestre (2,176m). With 19km at an average of 9% and countless switchbacks, it is a bucket list climb - one of the toughest in the Alps which appeared 4 times in the Giro d’Italia. In 2018, this is where Chris Froome launched a daring long range attack that would earn him the overall victory.

It is also another great testing ground for gravel bikes as the top eight kilometers are unpaved. After the summit, a short descent brings you back to your starting point. It’s a big day: 74km including 40km of gravel, 2,440m of climbing, and over one hundred switchbacks.

The highlight of the second day is the Strada Militare Colle Finestre – Gran Serin. An abandoned military road closed to traffic, this 15km section goes above the Strada dell’Assietta and reaches 2,800m straight out from the start at 1,900m. It is steep right from the start… and stays steep. You may have to walk a short section, and you'll struggle to stay upright more than once. But you’ll love the huge views and the remoteness of the Strada Militare.

After a break at the Forte Gran Serin, a fortification built at the end of the 19th century, make your way down to the Colle dell’Assietta and the Rifugio Assietta, the only place serving food and drink on the Strada. The building does not look very promising from the outside but you can have a full three course meal and a great espresso. This is Italy after all.

The final section of the Strada goes over a succession of small passes: Colle Lauson (2,490m), Colle Blegier (2,381 m), Colle Costa Piana (2,313 m), Colle Bourget (2,299 m) and Colle Basset (2,424 m). 20km of pure gravel bliss to Sestrières, a ski resort built in the 1930s by the powerful Agnelli family, owner of Fiat. From there, you are back on tarmac to ride down the Chisone Valley and back up to the starting point via the southern side of the Colle delle Finestre. 65kmfor day two, 40km on gravel and 1,950m of climbing: you earned your big Italian dinner.

Read more on this tour in the story written by Alain for the Scott Sports website. 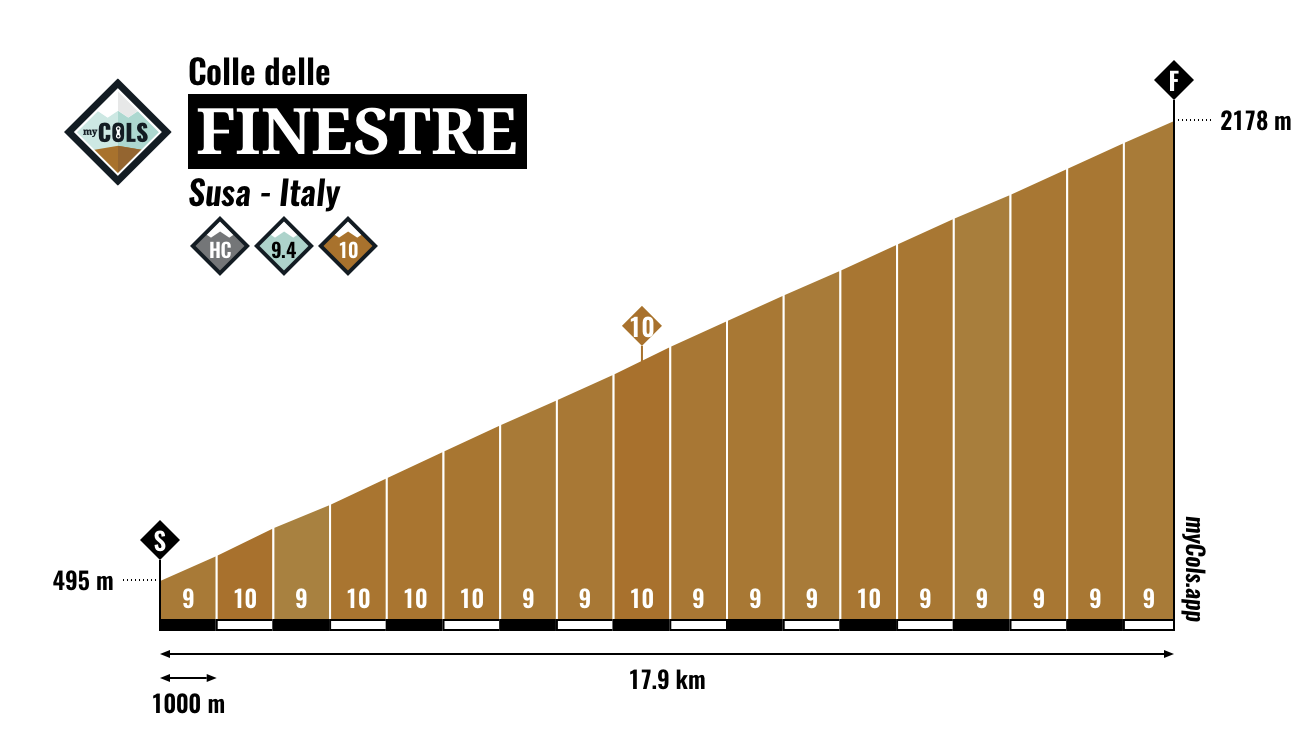 There are many hotels in the grim looking ski resort of Sestrières. For a more authentic mountain experience, we stayed at the Rifugio delle Rane, at the other end of the Strada dell’Assietta. There are only three rooms so book early to enjoy fantastic views and great dinners in this family owned refuge: www.rifugiolagodellerane.it 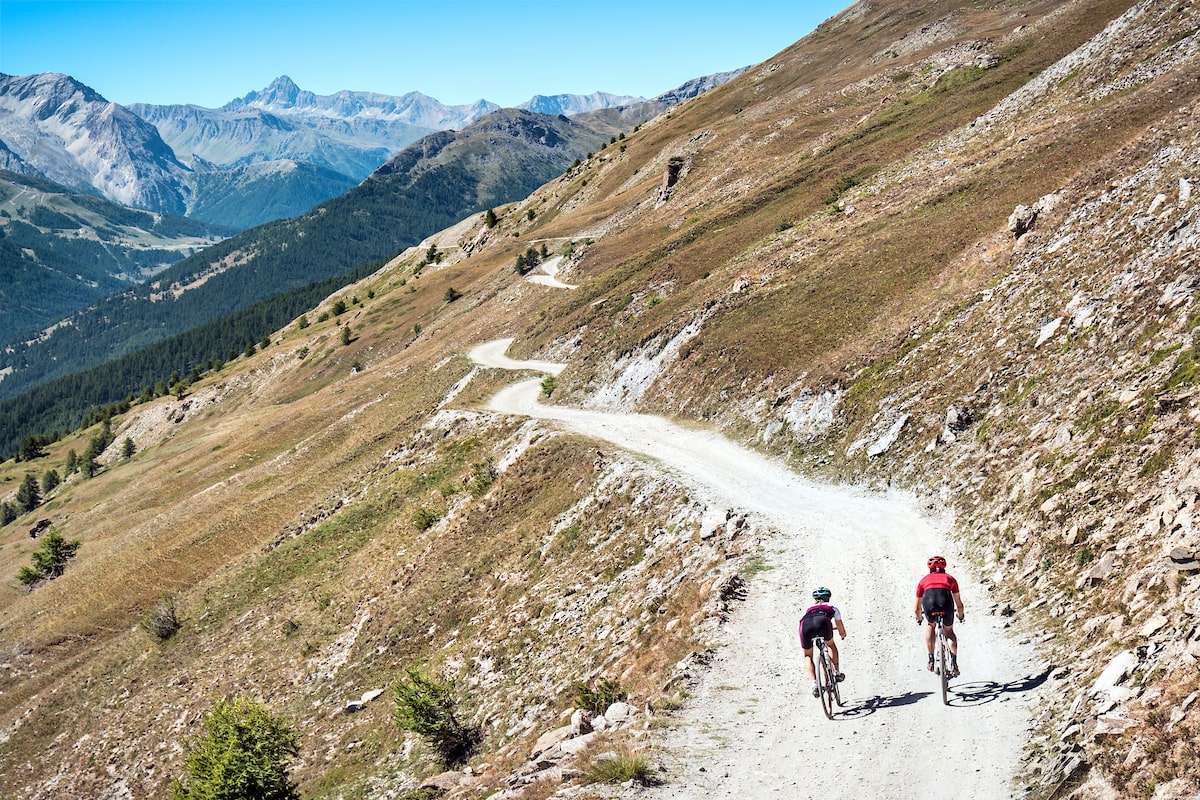 The first downhill section of the Strada dell'Assietta towards Sestrières 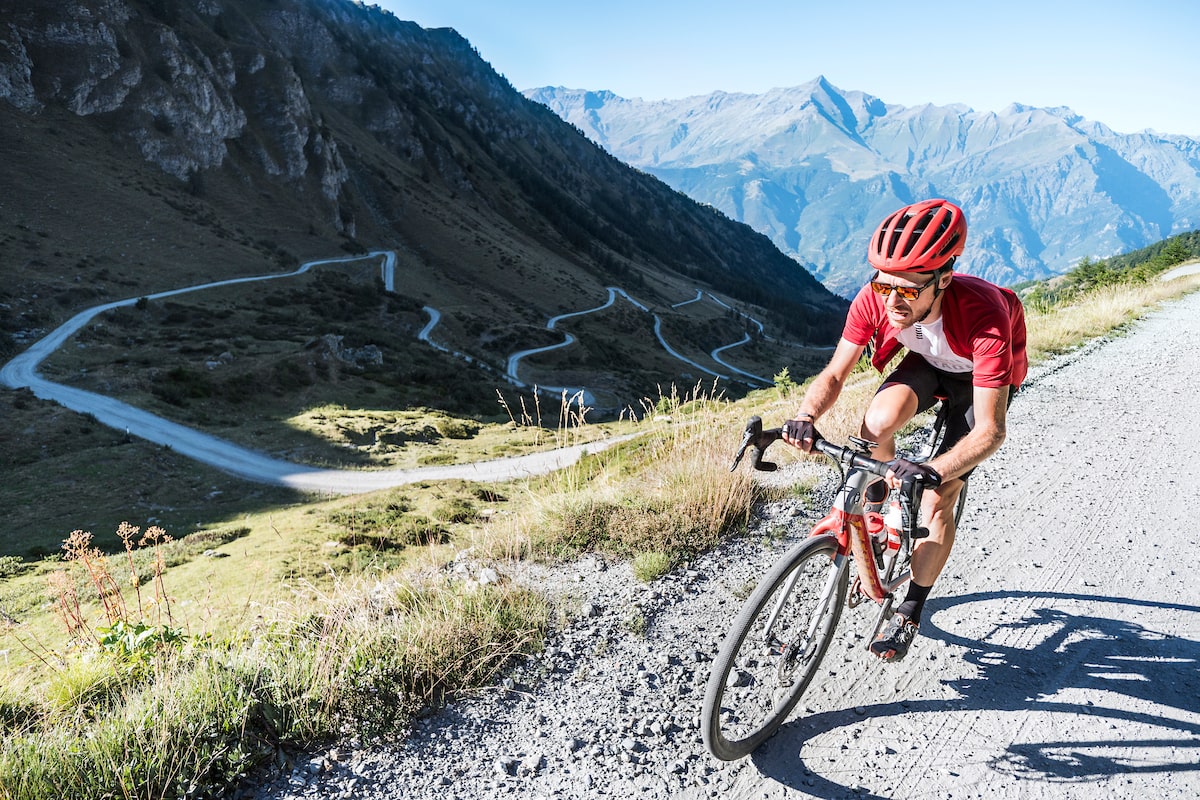 Near the top of the Colle delle Finestre 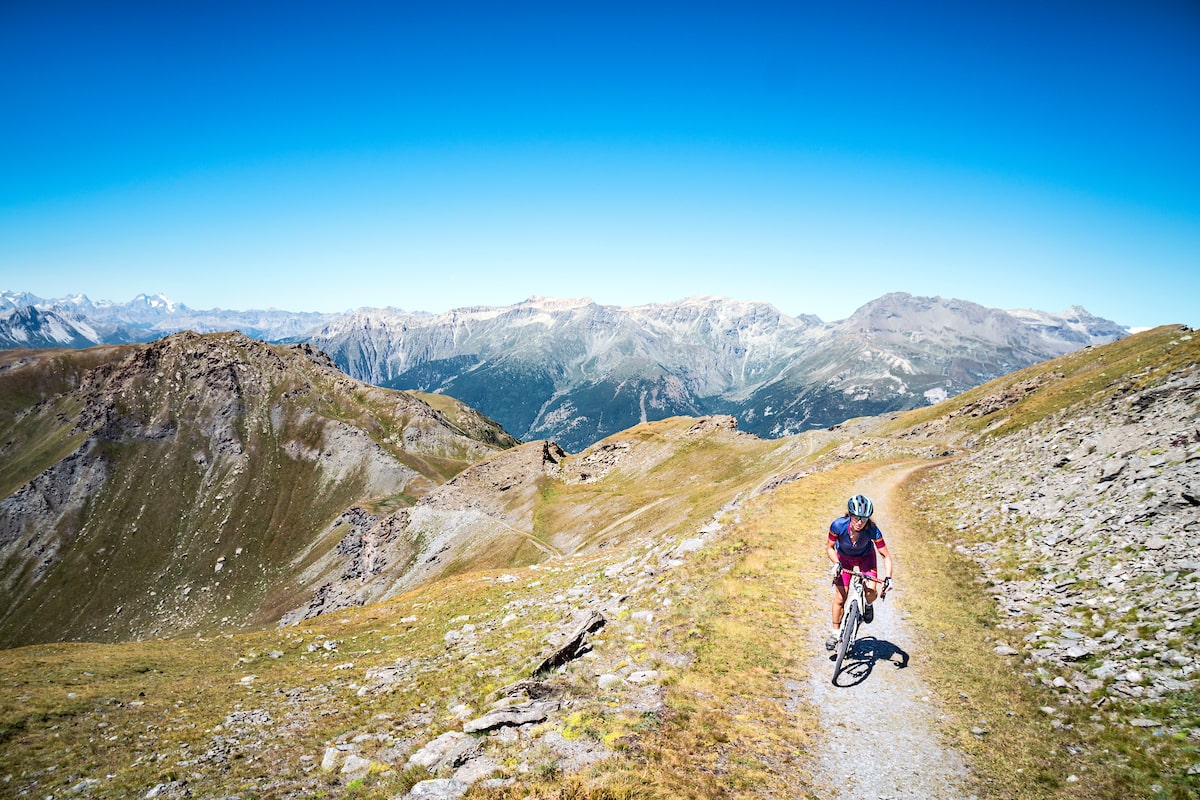 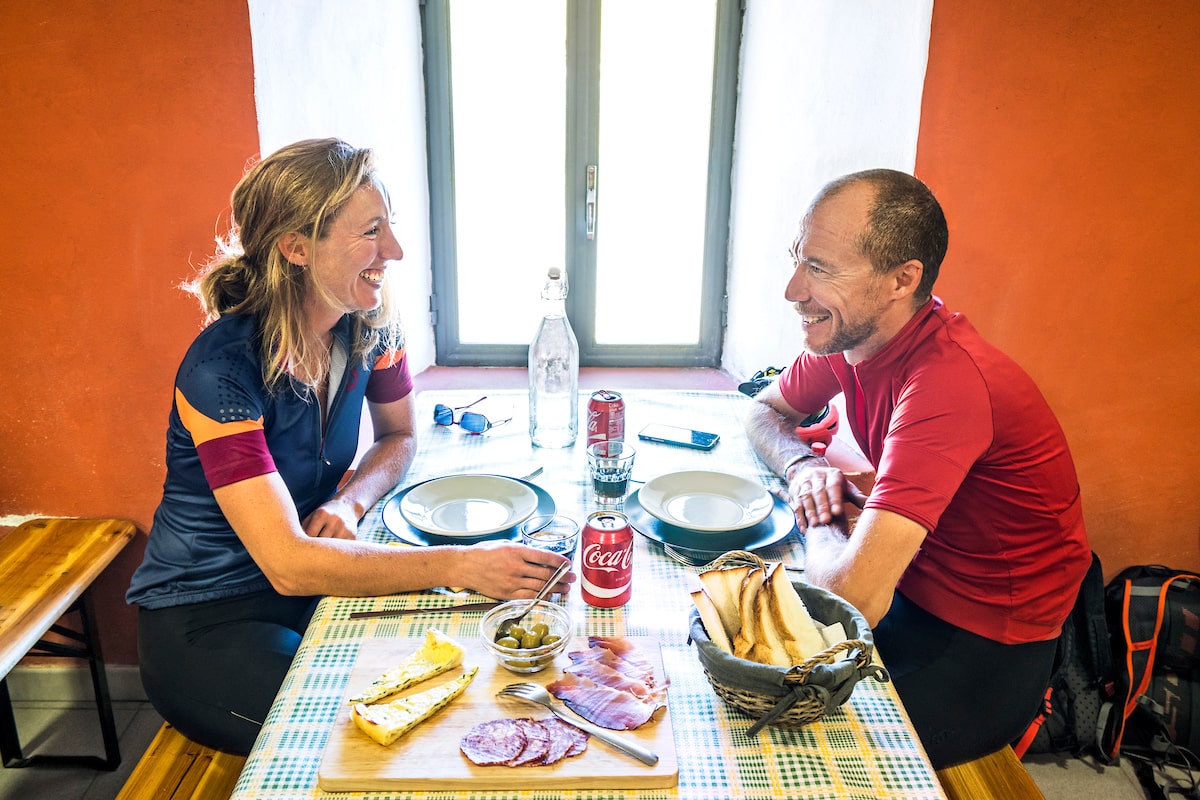 Lunch stop at the Rifugio Assietta