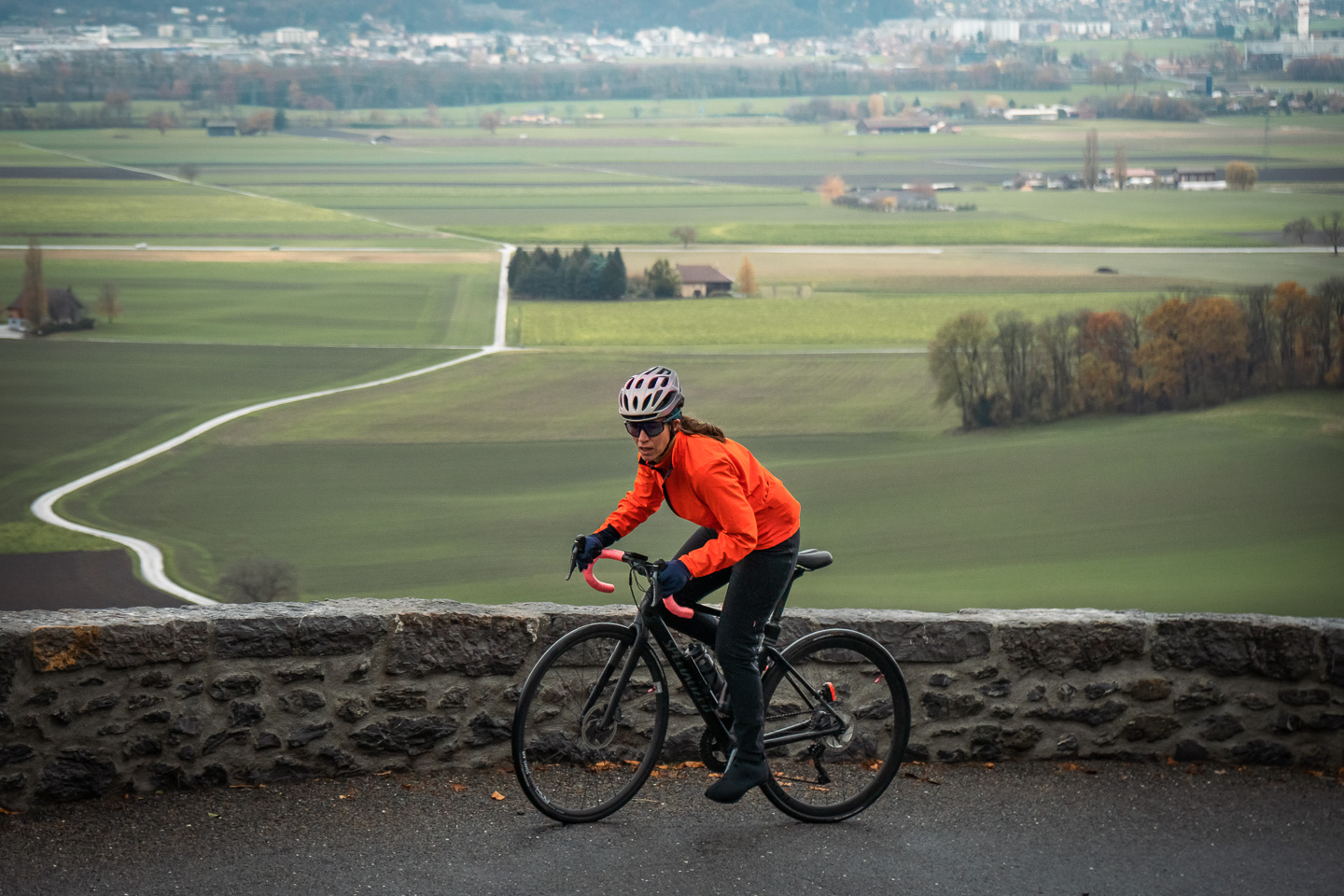 This ride is part of our "Winter riding in the Alps" collection. To learn more about it, read this story on the blog.
We live in Gryon, a village half way up the Col de la Croix (featured in this loop on Switchback). If the road are dry enough, we start our rides from our house. But if they are really wet, riding down for 10 kilometres would be miserable at best, and dangerous at worst because of the ice. Therefore, we drive or catch a train to the valley and ride from there.
There are several options, and this loop in the Chablais region is one of our favorites. We can start it from different locations. If we can catch a train, we go to Bex. Otherwise, we like to start at the World Cycling Centre in Aigle. It hosts the headquarters of the UCI and there's a bike themed café as well as a cool exhibition area with a hall of fame of cycling. If you're lucky, you'll also see world class athletes training on the indoor velodrome. And if you're really lucky, you'll bump into the UCI president or some other cycling big wigs gathering there to discuss very serious matters. 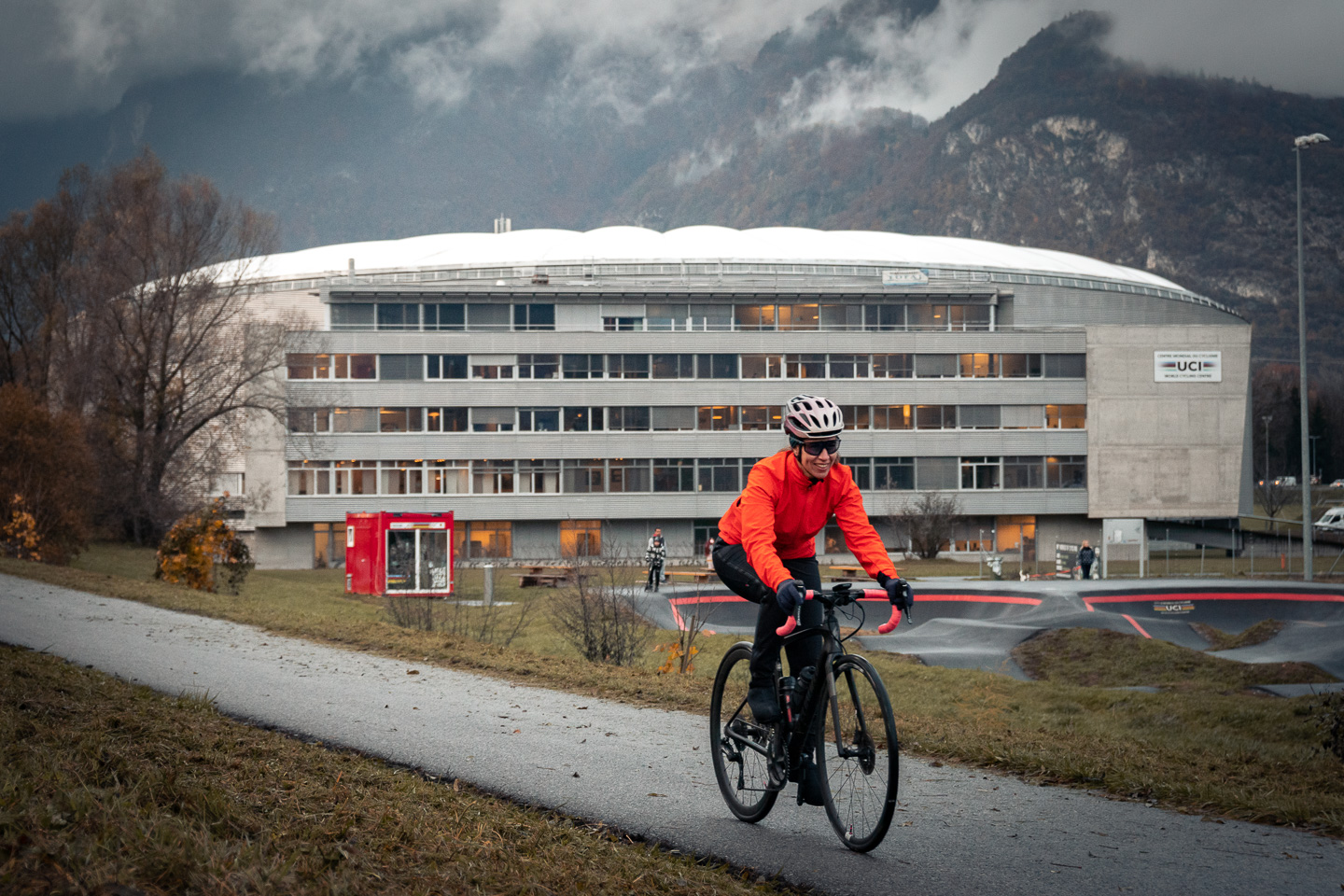 The World Cycling Center is also conveniently located on a bike path along the Rhone, which is where the loop starts. It is a nice warm up before a series of 6 short climbs on the foothills of the mountains:
Each climb is long enough to give you a good workout, and short enough so that you don't freeze on the downhills. 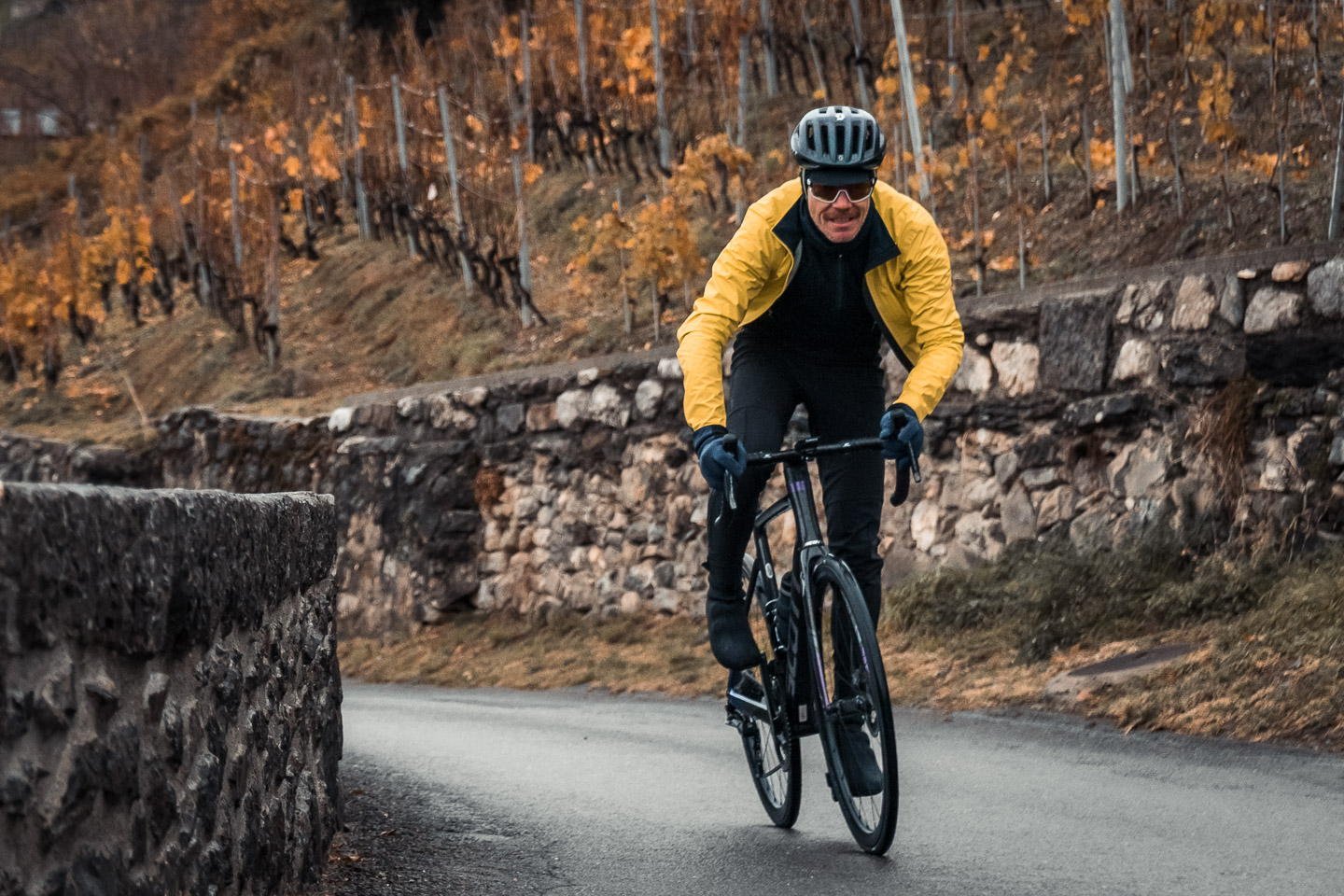 As you go up and down this rollercoaster, you'll ride through different parts of the Chablais vineyards, one of the several wine regions of the canton de Vaud. Just before the last small climb to Yvorne, you'll ride past the castle of Aigle, a monument out of a fairy tale. Lillie and I got married there on a cold January day, so that might explain why we like to go back there in winter.
After the last climb in Yvorne, we like to keep going on the flat for a few kilometres before coming back to the World Cycling Center on the Rhone bike path. The loop as featured here is 54km with 530 meters of ascent, but its possible to make it longer by adding a bit in the Villeneuve vineyards and/or by going towards St-Maurice.
99% of the ride is on roads with low or no traffic, which makes it even nicer. Once back at the World Cycling Center, start your recovery at the Café Le Vélodrome or, like I did, have some fun on the nearby pump track.

When we rode this loop at the end of November, the roads were soaked, it was about 8°C and it rained for the first hour. Great weather for frogs, and to test two pieces of Velocio clothing we had never used before: the Alpha Long Sleeve and the Overpant.
The Alpha Long Sleeve is inspired by mountain sport. According to Velocio, it's a mid-layer made of Polartec’s Alpha Direct insulation which creates airspace to trap warm air. I like to call it my Muppet Show costume, because it's fluffy. But more importantly, it works. Lillie likes to stay very warm, so she chose to wear the Softshell Jacket over her Alpha Long Sleeve. I went for the Rain Jacket, and we were both dry. And happy. 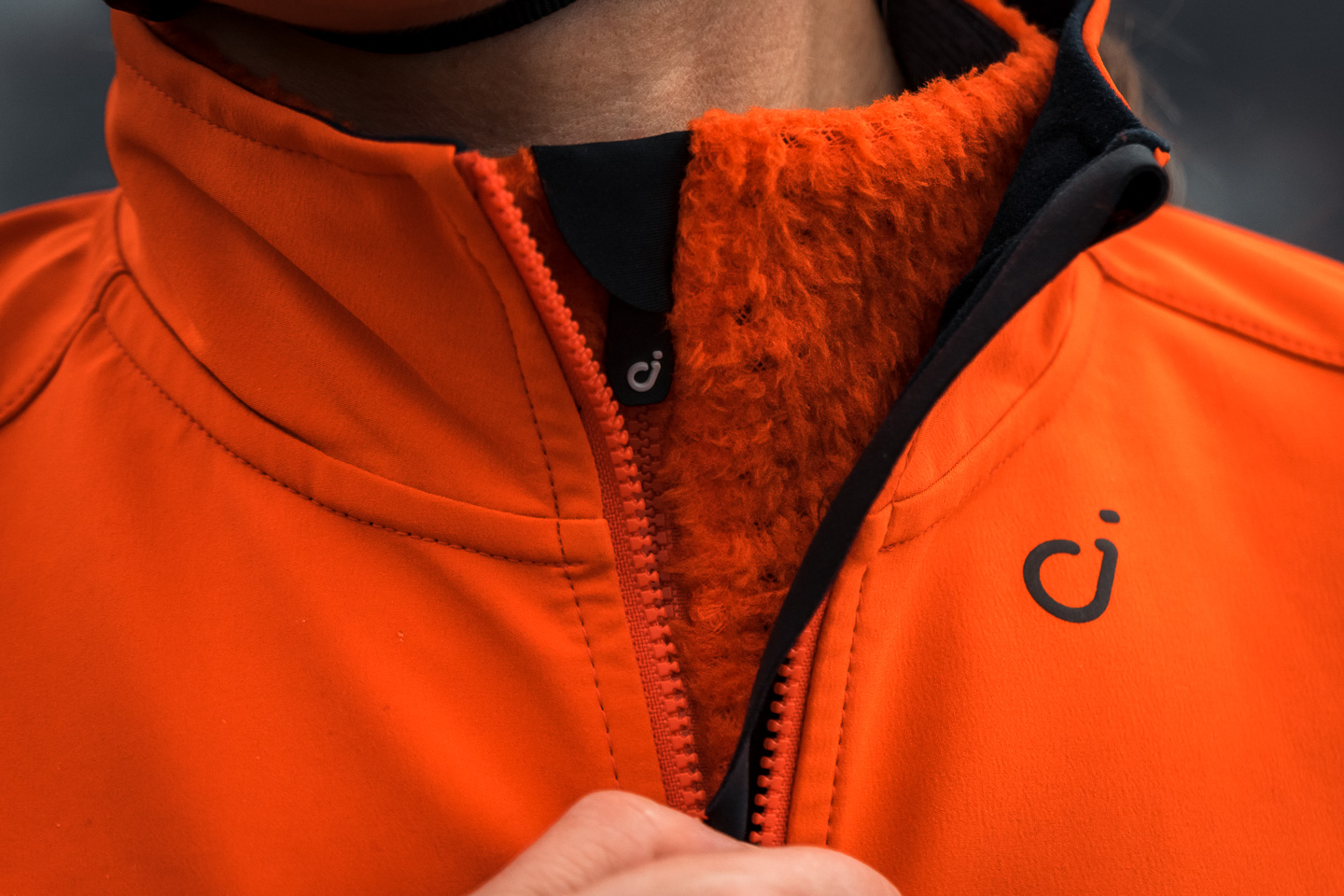 The Overpant is even more intriguing. Rain pants worn over bib shorts are not new. They are not very popular either: they are bulky, hot and just not comfortable. The Overpant is different: the fit is tight and it is stretchy. It still felt a little bit weird at the start of the ride, but after a few minutes I just forgot about it. I was warm and stayed mostly dry throughout the ride. In fact I would have stayed completely dry if I had used an ass saver, but I decided it would not look good on photos. 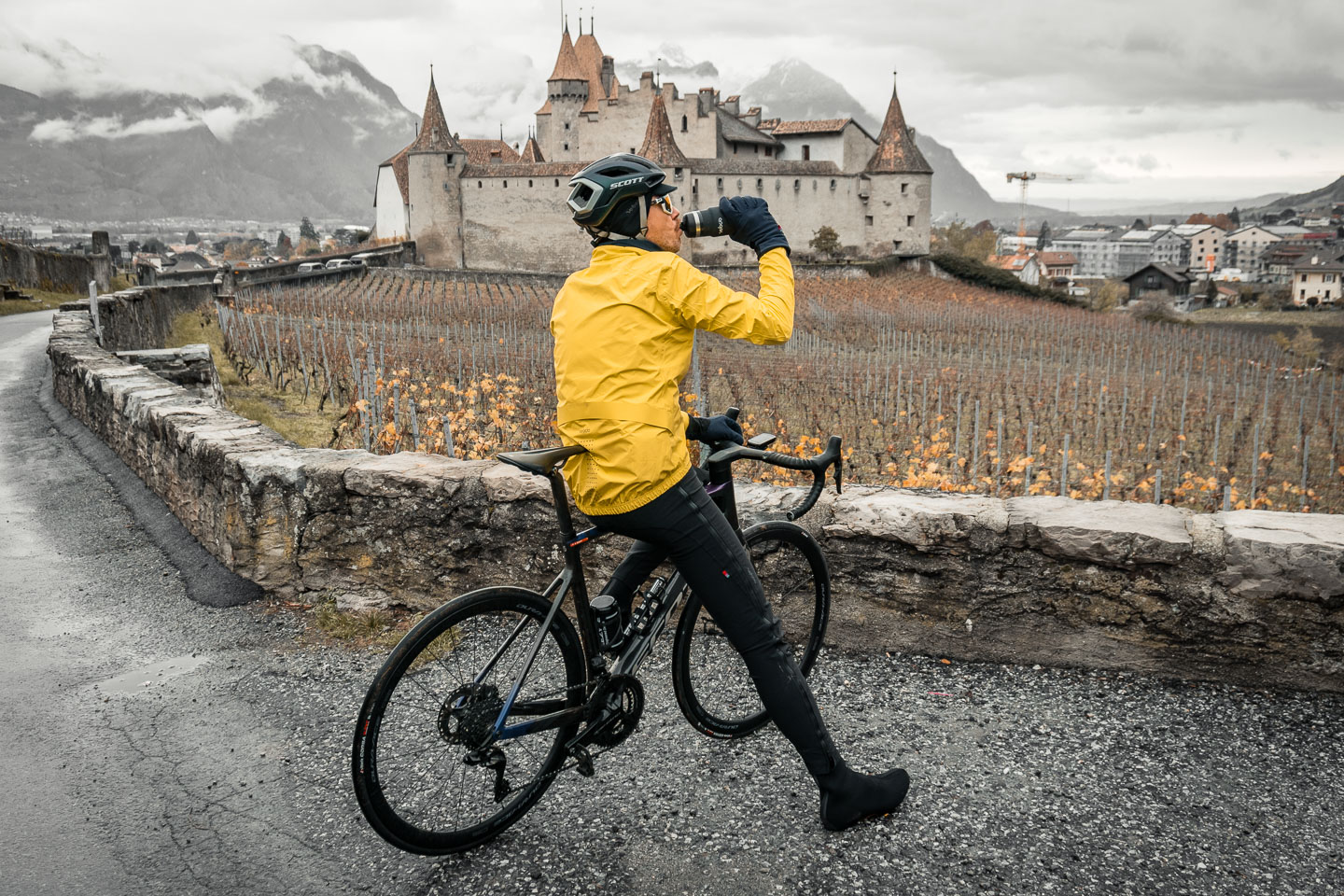 The overpant: tight and stretchy

Also, special mention to the Alpha gloves. I discovered them last winter and they changed my life, or at least my cold rides. I've had warm gloves before but they were bulky and this made braking and shifting difficult. Thanks to the same Polartec aka Muppet Show insulation as the Alpha Long Sleeve, the Alpha gloves are tight fitting, stretchy and extremely warm.
You can find more information on the Velocio products at www.velocio.cc . And feel free to email me with any question you might have. I have a little gift in the form of a sweet discount code for those who contact me. 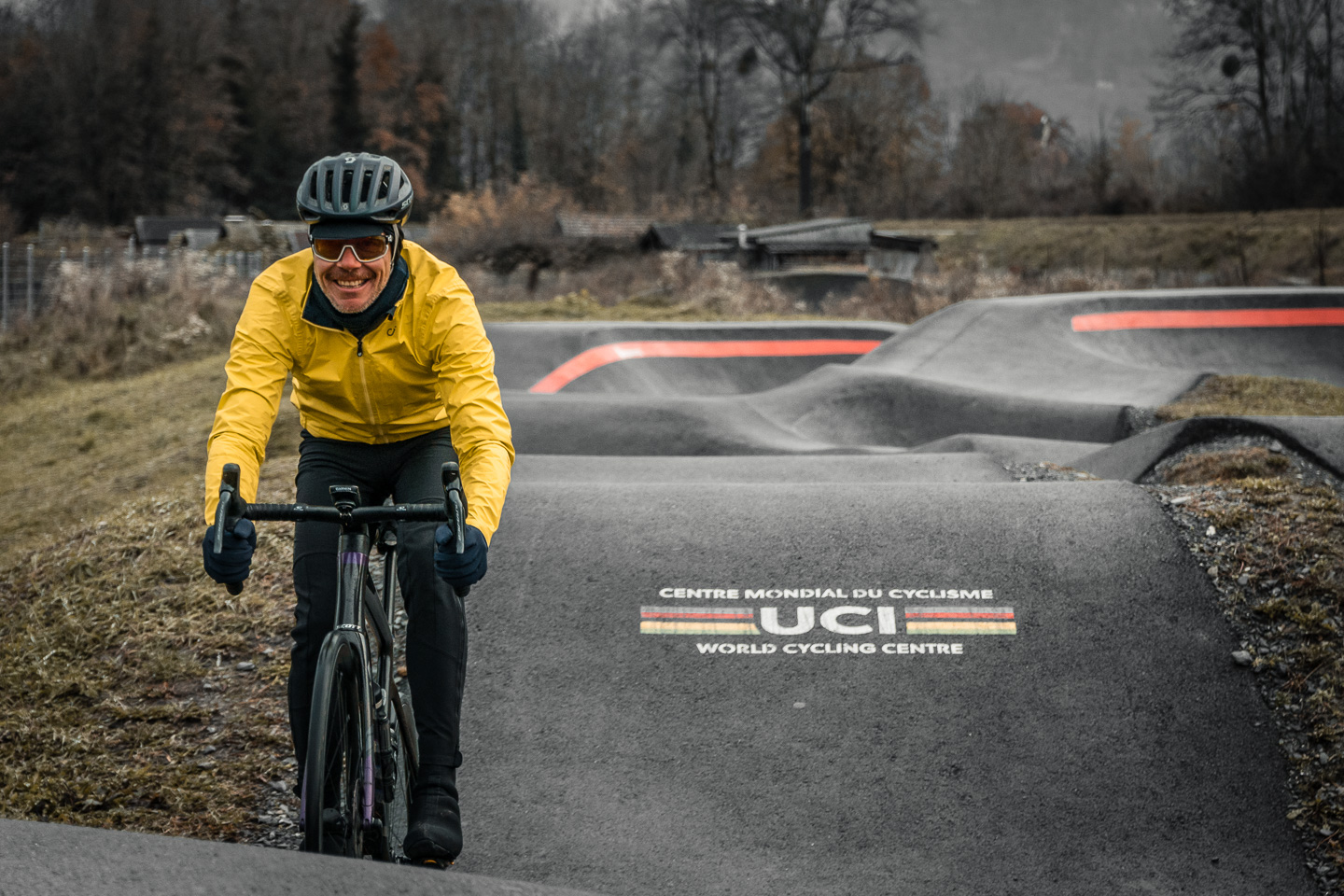 I survived the UCI pump track 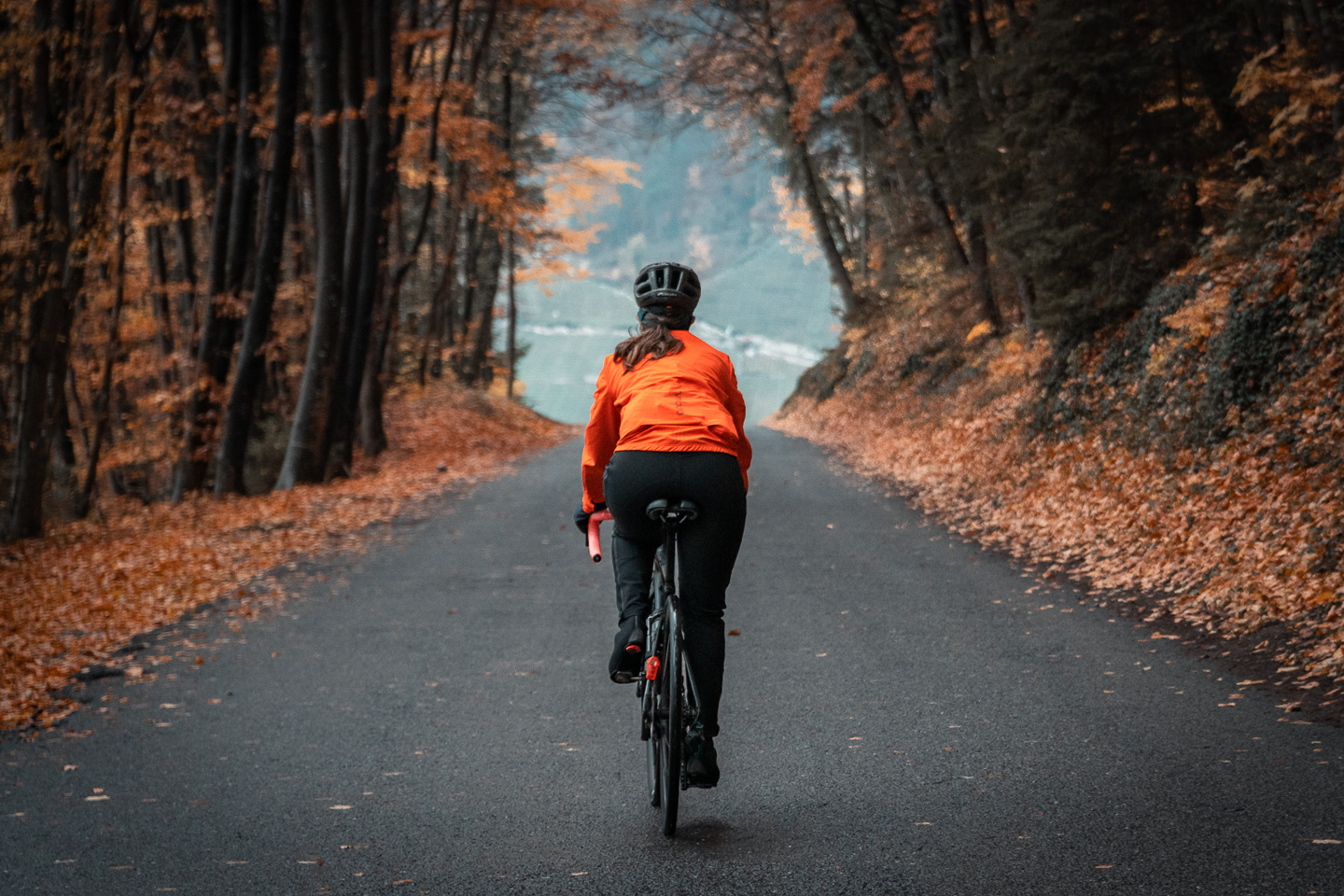 Just another quiet road in the Chablais hills 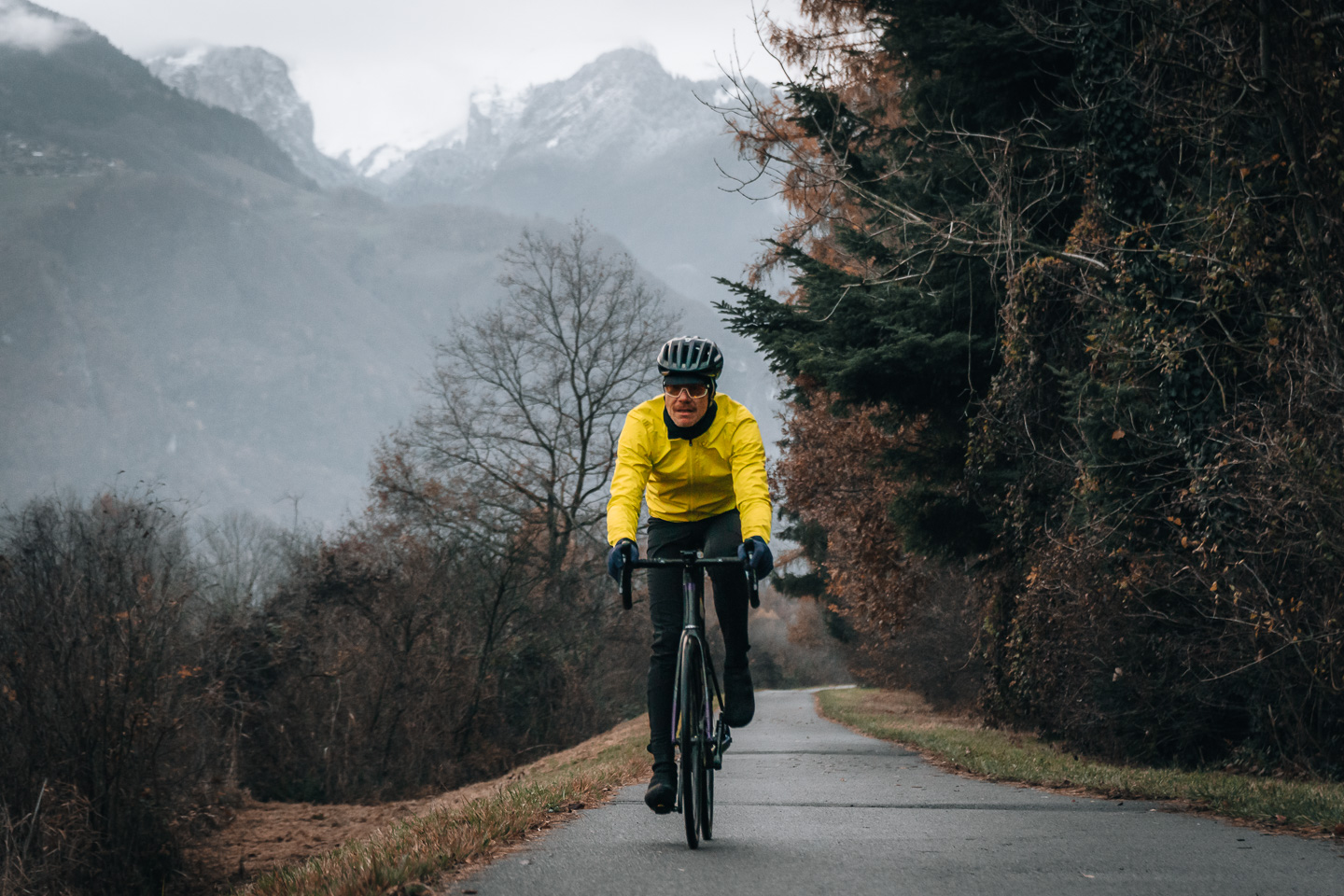 It was not a day to venture into the mountains 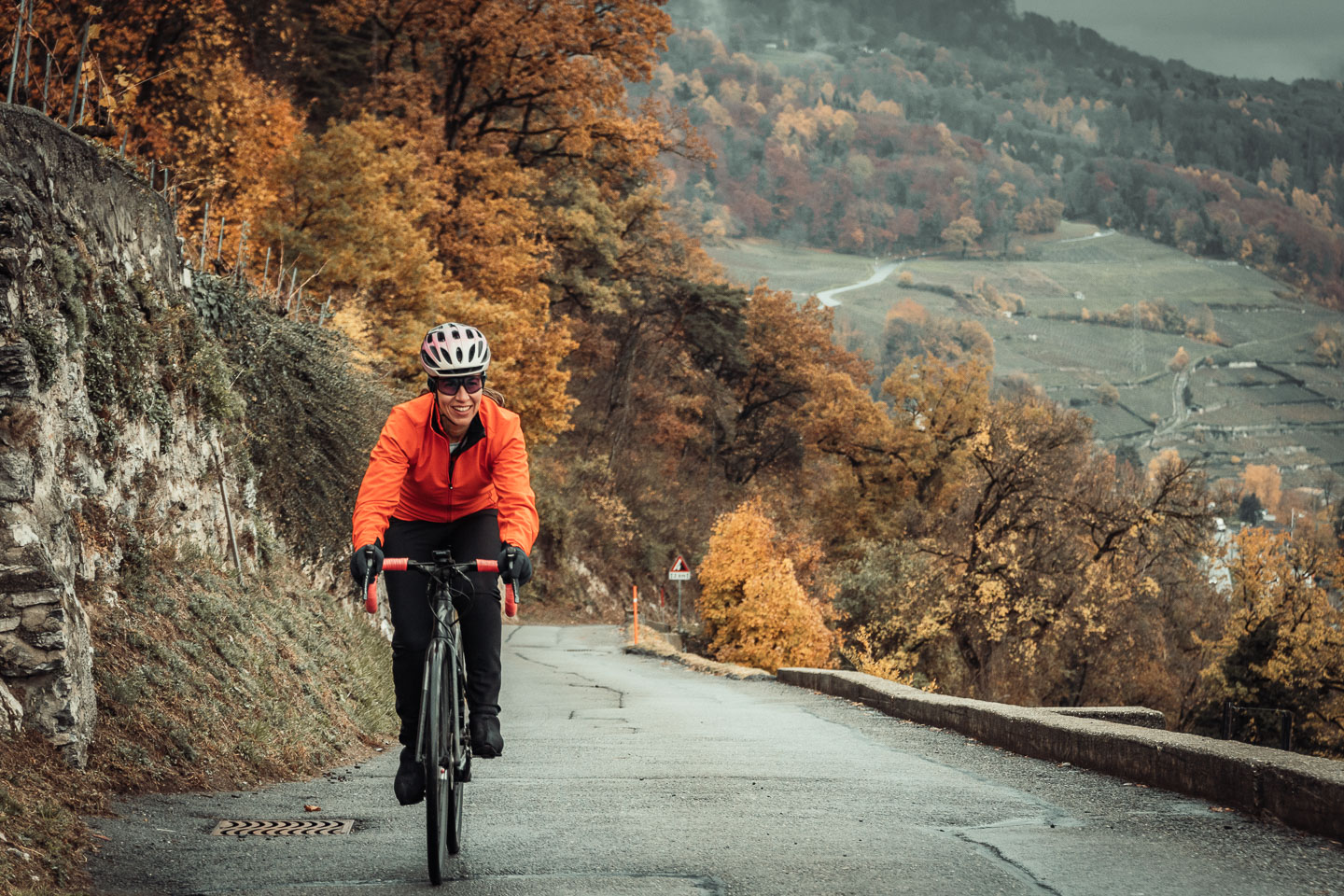 Lillie on the way to Verschiez (climb #5) 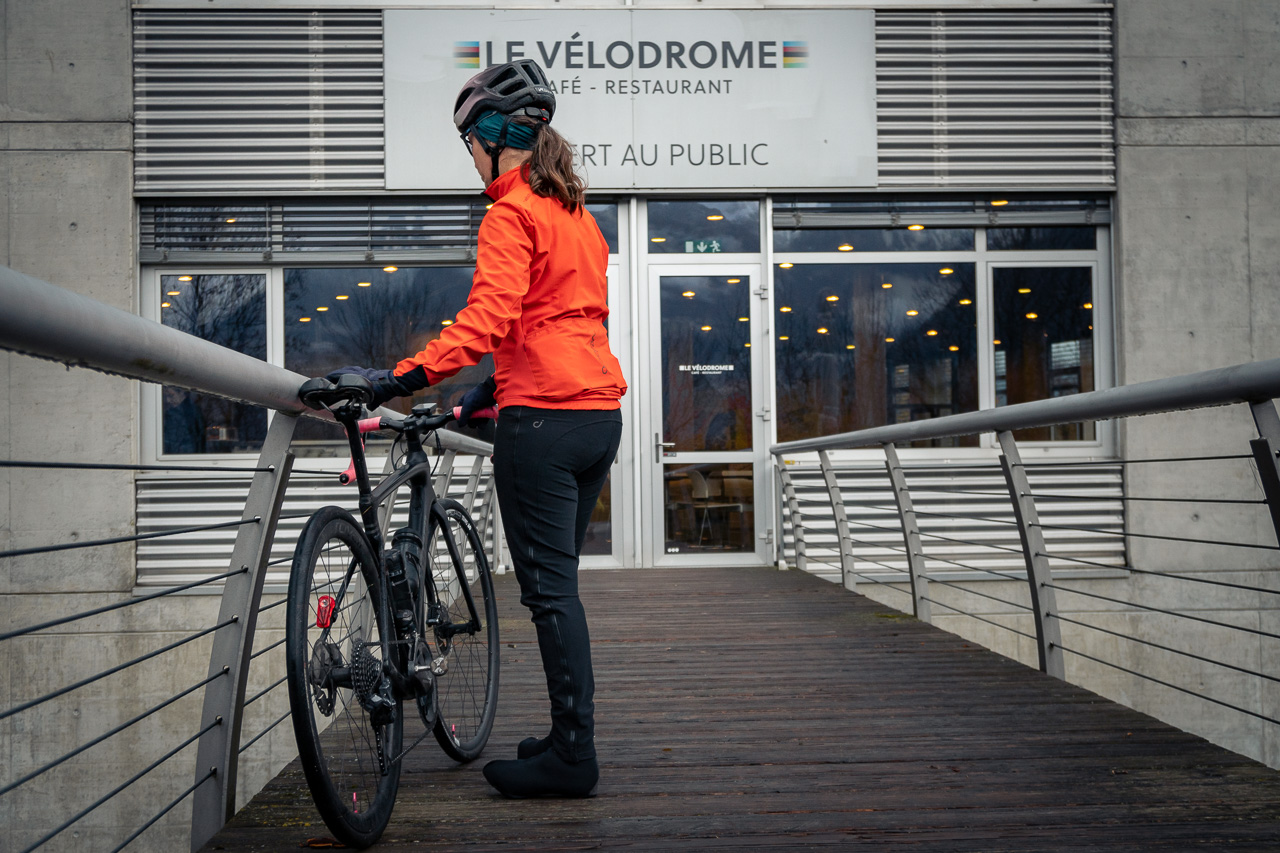 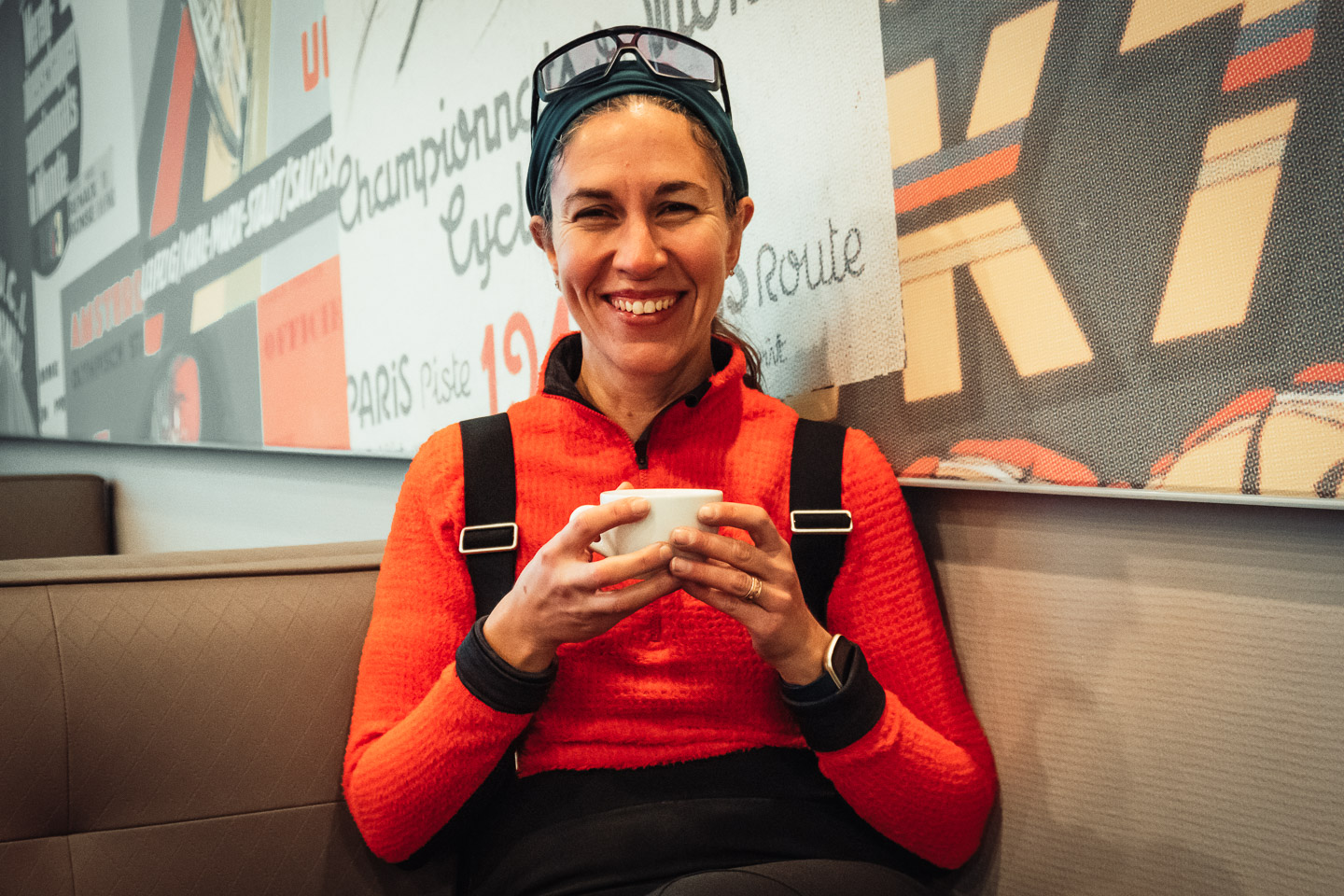